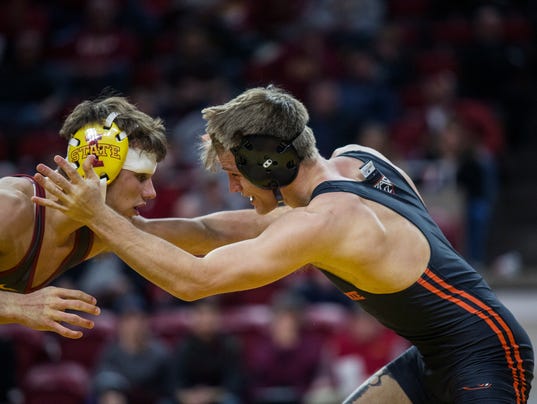 AMES, Ia. — A happy Iowa State wrestling team walks into the Pete Taylor Media Room wearing aviator shades and blaring rap music. Kanen Storr and Jarrett Degen have a swagger about them as they settle in to discuss their first team victory in a long, long time.

“I feel like we worked for this and we earned this,” Storr said. “We’ve fallen short a couple of times, but to see the crowd’s reaction, it gave us a little taste of victory, and it feels pretty great.”

Iowa State beat Oregon State, 24-16, at Hilton Coliseum on Sunday afternoon. The Cyclones won six of 10 weights and secured their first dual victory of the 2017-18 season, the first since they beat Northern Colorado back on Nov. 26, 2016 (after which they lost 14 in a row), and the first under first-year head coach Kevin Dresser.

This has been a trying year for Dresser, his staff and his wrestlers. He predicted as much during the team’s media day, when he said the team might experience plenty of ups and downs as they attempt to rebuild one of college wrestling’s most-historic programs.

As it turns out, there have been many more downs than ups. Dresser has battled defections and inexperience all year. Only a handful of wrestlers have pinned down starting spots while Dresser has shuffled others in and out of the lineup in the hopes of finding the best Iowa State (1-4) team for the 2017-18 season.

That process continued this weekend. Instead of Ian Parker, who was the starter at 133 pounds earlier this year, Markus Simmons got the call against both Northern Colorado and Oregon State (2-3). Logan Breitenbach started at 157 on Friday but Skyler St. John filled that role on Sunday. Dresser also had two Cyclone wrestlers prepare at three other weights — 149, 174 and 197.

All the while, Iowa State struggled mightily on the mat. All four of the dual losses ahead of Sunday were winnable, but the Cyclones simply fell short, be it because of losing close matches or a lack of bonus points. All of it frustrated Dresser, and he expressed his impatience openly.

After losing to Drexel on November 12: “Thank goodness it’s November, because we have a lot of things to fix … I think we have some places where we’re exciting and we’re good, and other places where we need to step up or find another guy.”

After losing to Rider two weeks later: “I think we let another win slide out of our hands … we have to get better at wrestling. We’re making some dumb mistakes.”

After losing to Wyoming in early December: “We have to find out who’s with us and who’s not with us — not in terms of winning and losing, but in terms of effort, who’s coming to practice and who’s ready to go. It’s easy to say you want to be great, but who really wants to be great?” 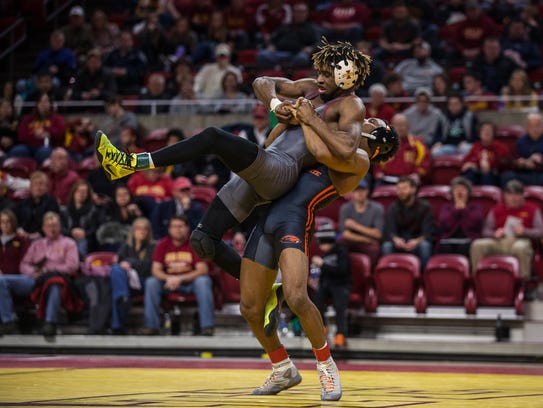 There was a chance Sunday might unfold the same way. Oregon State took a 13-0 team lead after the first three weights. Corey Griego and Amor Dhesi combined for six takedowns en route to a decision and major, respectively, over Sam Colbray and Marcus Harrington at 197 and 285.

The Cyclones forfeited 125 pounds, where the primary departures have occurred. But from then on, Iowa State won six of the final seven weights, scoring more takedowns (8-3) during that stretch while also scoring bonus points in three matches.

“That’s what we have to do,” Dresser said after the win. “We have to have that bonus-point mentality. That’s not going to come to the whole team this year, but we have to take advantage when it comes individually.” 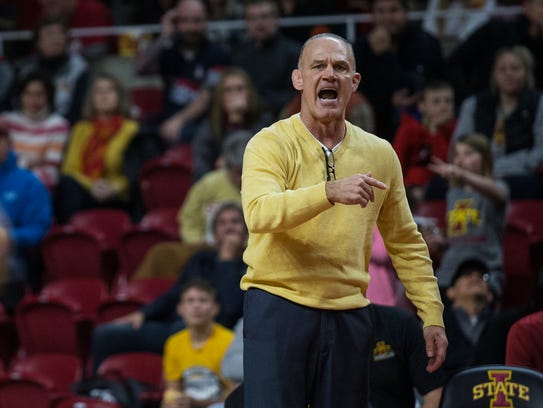 Iowa State coach Kevin Dresser calls out to one of his wrestlers during a dual against Oregon State on Sunday, Jan. 7, 2017, in Hilton Coliseum. Iowa State won the dual, 24-16, earning their first win of the season.  (Photo: Kelsey Kremer/The Register)

Simmons emerged victorious with a 5-0 decision over Devan Turner at 133, the first of four straight victories for the Cyclones. Storr followed with a 9-1 major decision over former Iowa City West standout Jack Hathaway.

Storr, a redshirt freshman from Leslie, Michigan, struck first with a takedown just before the end of the first period. He then rode Hathaway for the entirety of the third period, wherein he also scored two more points on a tilt. Another takedown and tilt in the third secured the major.

“He snapped me, and I kind of fell right into his ankles,” Storr said. “That’s just the way it worked out, and I ended up with a takedown with no time left on the clock. I knew he was a good mat wrestler, but I’m pretty confident in my top game. Being able to ride him was huge.”

Degen then took the mat and cruised to a 17-2 technical fall — his second technical superiority of the weekend after posting a 21-6 win over Northern Colorado’s Jimmy Fate on Friday — to bring Iowa State within 13-12. After, Chase Straw scored a takedown in overtime to defeat Hunter Willits, 5-3, at 157 to give the Cyclones the lead.

Oregon State returned the favor at 165 when Billy Bigelow scored a late takedown to beat Skyler St. John, 3-2. But up came Danny Bush for Iowa State at 174. In the third period, he worked Myles Terry over for a pin, giving the Cyclones a 21-16 lead. They would not trail again.

“Good for him,” Dresser said. “He had a situation where he could take advantage of a strength. Everybody in the nation knows he’s good on top. When everybody knows you’re good on top, then you get on top and still pin somebody, that shows you’re pretty solid in that position.”

Dan Pestano closed the dual with a 4-3 win over Seth McLeod at 184. Pestano’s takedown midway through the third period put a stamp on the Cyclones’ first dual victory of the year, spurring the 2,794 inside Hilton Coliseum to their feet. 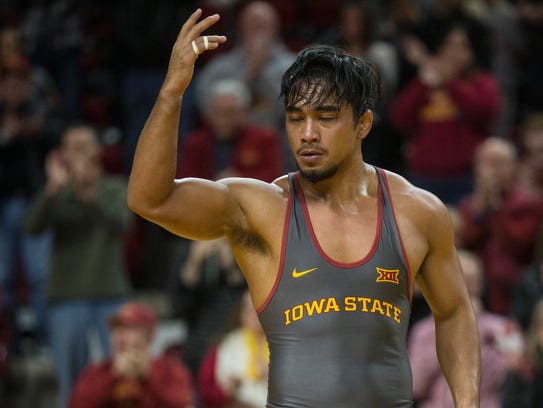 “It just all seemed to come together,” Degen said.

The team’s schedule will get tougher, and so afterward, Dresser called on his wrestlers to do the same. The Cyclones will travel to the Virginia Duals next weekend. Oklahoma and Oklahoma State are lurking at the end of the month, and meetings with North and South Dakota State kick off February.

But for the first time in a while, the Cyclones can move forward with a victory. It has been a long time coming for Dresser and his staff. He believes this is only the start of what’s to come at Iowa State.

“It’s hopefully one of many,” Dresser said. “The message is always progress, and I felt like we made some progress at some weights today.”

No. 8 Women's Basketball defeats Kansas State 75-64 on the road - University of Texas

Peterson: It’s taking way too long for Iowa State to figure out how to stop opponents from scoring