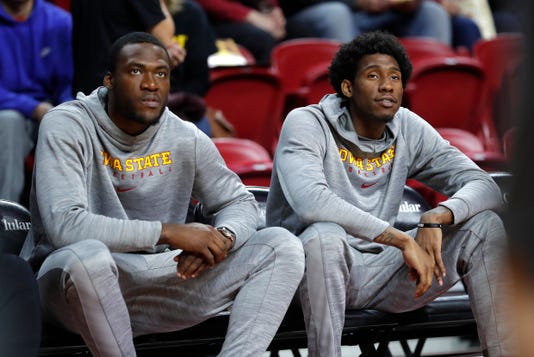 AMES, Ia. — Cameron Lard and Zoran Talley are a go for returning to Iowa State’s basketball lineup on Monday against North Dakota State.

He’s not only a no-go in the 7 p.m. game at Hilton Coliseum, but he’s also very unlikely to play against Iowa at Carvery-Hawkeye Arena on Dec. 6.

That’s the word Friday from coach Steve Prohm, whose active roster of eight scholarship players suddenly will jump to 10.

“Cameron and Zoran — they’ll be in in uniform Monday,” Prohm said. “They’ve checked all the boxes.”

Prohm suspended both for the first seven games for not living up to what he expects from his players off the court. He said during the first week of November that it would be the North Dakota State game, at the earliest, before they could return to active status if they followed the plan Prohm set for them.

Reasons for Talley’s suspension haven’t been disclosed. He’ll wear a mask to protect his nose, which was broken during practice.

They’ll return to active duty Monday for the 6-1 Cyclones, but not immediately to the lineup.

The once-suspended players will play, however.

Wigginton, Iowa State’s starting point guard, is still recovering from a strained left foot that has limited him to just one game.

“He’s going to get out of his boot this weekend, then it’s week to week,” Prohm said. “It still could be mid-December. After we go through this week, we’ll know more.”

Asked specifically if he thought Wigginton would be healthy enough to play at Iowa, Prohm said:

Peterson: Iowa State got what it needed against Oklahoma State: A victory