The Cyclones are going from facing fifth-ranked Michigan and No. 15 Seton Hall during the just-completed Battle 4 Atlantis in the Bahamas…

… to Wednesday’s 7 p.m. game against Kansas City at Hilton Coliseum…

… and then to Sunday’s 8 p.m. game against Seton Hall again.

One for sure. It’s the trap Prohm hopes his 4-3 team can avoid. 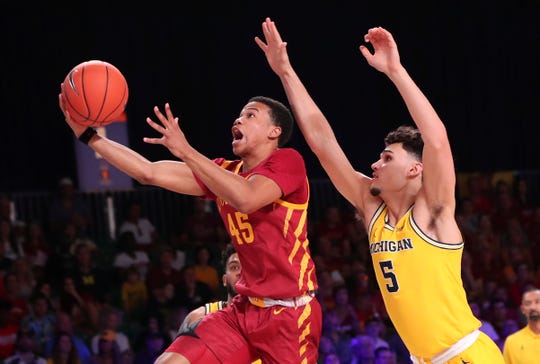 Iowa State went 1-2 in the Bahamas, losing to Michigan, beating Alabama and then losing Friday against the same Seton Hall team that invades Hilton at 8 p.m. Sunday in the Big East-Big 12 Battle.

“For us, playing those teams really helped us a lot,” George Conditt said. “It showed us what we’re capable of doing and what we need to work on.”

They returned home around 3:30 a.m. last Sunday. They practiced Monday and Tuesday.

“Can’t take any game for granted,” Conditt said. “Any competition is good competition. Anybody can beat anybody; they just have to come in with the right mindset.” 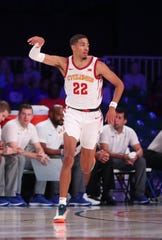 Iowa State lost at Oregon State on Nov. 9, then beat Northern Illinois by 18 points three days later in Ames. This turnaround is similar.

Yes — and Prohm hopes not.

“I know how good of a coach he is,” Prohm said of the Roos’ Billy Donlon.

Iowa State is good, too, but can be better with more attention to rebounding and defending the 3-point line. Losing against Atlantis champion Michigan by seven points, and against a Seton Hall team that includes players standing 7-2, 7-1 and 6-11 by eight points is no disgrace.

It’s the first of a five-game homestand — five games before opening the Big 12 at TCU on Jan. 4. After Wednesday, it’s Seton Hall on Sunday, Iowa on Dec. 12, Purdue-Fort Wayne on Dec. 22 and Florida A&M on New Year’s Eve.

And it starts with a “character game.”

Iowa State columnist Randy Peterson has been writing for the Des Moines Register for parts of five decades. Reach him at rpeterson@dmreg.com, 515-284-8132, and on Twitter at @RandyPete. No one covers the Cyclones like the Register. Subscribe today at Des Moines Register.com/Deal to make sure you never miss a moment.

Sooners move up to No. 6 in CFP rankings heading into Big 12 title game

Recruiting mailbag: Is Tamin Lipsey a top-25 talent? What's next for Bowen Born?

Peterson: This is Babb’s time to shine, to star and to be an Iowa State basketball leader

Peterson: The biggest day in Iowa State football history followed what was one wild week