Everyone knows how enthusiastic they can be; just ask folks who won restaurants on San Antonio’s famed River Walk.

So Jamie emailed ESPN a letter during last year’s Alamo Bowl week. He invited the GameDay crew to Ames — but not just for any game. He wanted them to experience what would become the most anticipated Cy-Hawk football game of all time. 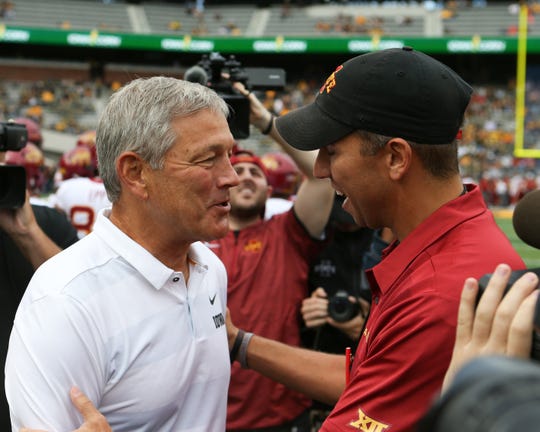 “We can guarantee the GameDay crew a sold-out stadium, arguably one of the best tailgating environments in the country, and two really good football teams,” Pollard wrote. “Next year’s Iowa State team most likely will be the most talented and highest-ranked Cyclone football teams in the history of our institution, and Iowa will be one of the favorites in the Big Ten West.”

The idea was sparked. Reality is Saturday when GameDay sets up shop between Hilton Coliseum and the Scheman Building.

Panelists Kirk Herbstreit, Lee Corso, Desmond Howard and Rece Davis will preview the weekend’s games before Cy and Hawk kick off at 3 p.m. at Jack Trice Stadium. They’ll predict winners. Corso will don something related to the mascot of the team he likes most. They’ll talk about the Hawkeyes’ great defensive end, A.J. Epenesa. They’ll talk about ISU QB Brock Purdy.

I was working from out of town when Saturday night’s announcement came, but I heard that Ames was abuzz. (It was crazy where I was, too.)

“It was euphoric,” said super booster Jon Fleming, who heard the news while watching games at an Ames restaurant. “It’s another metric of how far this program is coming, and the respect everyone has for Matt Campbell.”

Iowa is 2-0 after beating Miami of Ohio and Rutgers. Iowa State is 1-0 after its three-overtime win against Northern Iowa. Both were Top 25 teams by the Associated Press when the selection was made. Iowa was 19th in the USA Today coaches’ poll going into last weekend, while Iowa State dropped out after its close call against the Panthers.

GameDay to Ames wasn’t a done deal, however, until Maryland rocked Top 25 Syracuse 63-20.

“Really excited for our fans,” Pollard said Saturday night. “They earned this with their incredible loyalty and support. Out fans have waited a long time for moments like this.”

I could not be happier for our fan base. They have earned this with their unwavering loyalty and passion. I hope everyone takes the time to enjoy this week. Go Cyclones! https://t.co/uklpsr783o

Pollard wasn’t the only big-wig beating the Cyclones GameDay drum. So was Ray Cole, past ABC board member and liaison to ESPN whose office is in West Des Moines. Cole reinforced to his ESPN buddies that Cyclones fans would turn out. He, too, advocated strongly that 2019 would be the most enthusiastic Cy-Hawk game on record.

And don’t forget the Iowa fan base — they’re famous for traveling well to major events, too. 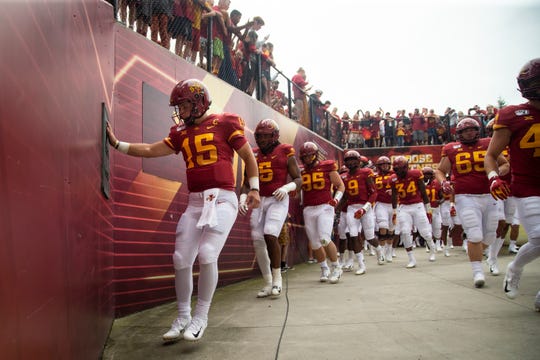 This sold-out game checked almost all the ESPN boxes — once it was evident Maryland was smoking Syracus, whose AD, for what it’s worth, is a former ESPN executive.

GameDay has done two Iowa home games. GameDay has caught up with the Hawkeyes on the road multiple times.

For Iowa State, it’s another indication of how Campbell’s program is trending. The Cyclones are coming off consecutive eight-win seasons, their best bowl-game assignment, and that’s just the start.

This team was the preseason pick to finish behind Oklahoma and Texas in the Big 12.  That’s not to be taken lightly, considering it’s usually picked to finish next-to-last or last.

Iowa has beaten Iowa State four times in a row. Campbell is 0-3 against the most tenured active FBS coach in the country, although his team Sunday morning was a 3-point favorite.

Randy Peterson is the Iowa State columnist for the Register. Reach him at rpeterson@dmreg.com, 515-284-8132, and on Twitter at @RandyPete. No one covers the Cyclones like the Register. Subscribe today at Des Moines Register.com/Deal to make sure you never miss a moment.

After loss to LSU, Texas drops out of top 10 in latest AP Top 25

From eighth-grade commit to Iowa State star recruit: Lexi Donarski is ready to shine for the Cyclones

Peterson: Welcome to a new and improved era of ISU football