AMES, Ia. — Tyrese Haliburton is still an NBA lottery pick, if he chooses to pursue the June 2020 draft. At worst, he’s still a first-rounder, so missing this season’s final nine or so games while recovering from a broken wrist isn’t likely to jeopardize the hope he’s had seemingly since being able to pick up a basketball.

Assuming he turns pro after this season — and really, that’s not a gigantic leap to assume his sweet-but-short Iowa State career is over — he’ll be the Cyclones’ first NBA first-rounder since Houston picked Royce White in 2012 in a few months.  And again, if anyone thought Haliburton was returning for what would be his junior season — there’s nothing wrong with dreaming and living in a glass-half-full world.

Asked directly, Monday, about what’s been assumed for months, Haliburton responded the way everyone that knows him like we do expected.

“We’ll discuss that when we get there,” he told reporters. “In all honesty, right now I could care less. I just care about where I am right now, Iowa State, and that I’m not allowed to help my teammates.”

How does it affect his immediate NBA stock?

“I made calls all (Sunday),” Prohm said. “My No. 1 thing is making sure I’m taking care with him. I think he’ll be fine. He’ll get a healthy recovery. The (NBA Draft Combine) isn’t until the third week in May. The draft isn’t until the end of June. He’ll be fine. The first thing is that he wants to be part of this team, and that shows his character. He wants to get healthy.”

The Combine, in Chicago, is May 21-24. The NCAA gives underclassmen 10 days after the Combine to withdraw from the draft and retain college eligibility.

“The way medical care now is so sophisticated, a sprained wrist, and even with a fracture, there’s nothing that will hurt his (NBA) future,” a scout told me Monday morning. “He’s already helped himself enough.

“At the end of the day and assuming no complications, he’ll be fine (in regard to the NBA).”

I checked in with another scout to whom I occasionally converse. Same story.

It’s horrible news for Haliburton, though. It’s bad for Iowa State, too, which will be hard-pressed (maybe literally against defensive-minded teams like West Virginia and Texas Tech) to win another game. No one wants to see anyone suffer season-ending injury, especially when it’s a good guy like Tyrese Haliburton.

What did he do after missing the final 15 or so minutes of Saturday night’s game? He did what he usually does, win or lose. He mingled with family. He posed for selfies with fans. He answered our questions after what happened on the play with 50 seconds left in which he not only re-injured his left wrist, but broke it.

We suspected some form of the news we received late Monday morning — that Iowa State’s best player, a potential lottery pick, was done for at least a few weeks, but the rest of the season and maybe even his college career? 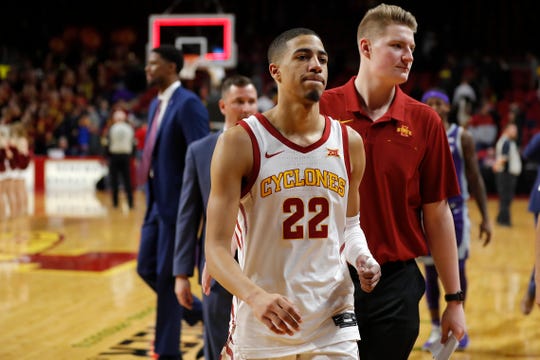 Tyrese can concentrate on healing. He can put all his attention into getting ready for postseason NBA workouts — even if he doesn’t end up entering the draft. Early-entries can change their minds, you know.

He can work on strengthening his body. He can work on fighting through double-teams, slashing to the basket and on shooting accurately off the dribble.

The NBA scouts have all that stuff in their notes during his wonderful, yet short, past season-and-a-half.

After the courageous final six minutes he played last Saturday were on a broken left wrist … scouts have now also seen his toughness, his dedication to teammates and loyalty to school and fans.

They also saw that Tyrese Haliburton is one tough future lottery pick.

Iowa State columnist Randy Peterson has been writing for the Des Moines Register for parts of five decades. Reach him at rpeterson@dmreg.com, 515-284-8132, and on Twitter at @RandyPete. No one covers the Cyclones like the Register. Subscribe today at DesMoinesRegister.com/Deal to make sure you never miss a moment.

Scouting Combine: How Hakeem Butler could work his way into the first round of the NFL Draft