For years, Oklahoma State was (affectionately) referred to as the “Cardiac Cowboys” — a nod to the team’s often thrilling finishes that, in most cases, resulted in a tally in the win column. Those teams gave you a scare, sure, but they showed up. And when the game was on the line, they showed out. They were, after all, the Cardiac Cowboys. After spiking your blood pressure, they’d put you in good spirits and send you on your way.

But in the wake of a deflating 45-35 loss to Texas Tech on Saturday for OSU, it’s officially past time we drop that flimsy label for a new, more fitting nickname.

Against the Red Raiders, the Lethargic Cowboys came out flat, then were promptly flattened. Tech took a 20-0 lead to open the game, and the only resemblance to the Cardiac Cowboys we saw thereafter was Chuba Hubbard running like the Heisman contender he is. He carried so much of the team’s weight on his back he was visibly limping at the end of the game.

The defense was pummeled by a quarterback named Jett Duffey, who this season has barely been able to complete forward passes. A week after OU made a mockery of him, making him look like a quarterback more fit for ITT Tech than Texas Tech, he threw for four touchdowns against OSU. Turns out, just about every third-string quarterback in Big 12 history can enjoy a career day against the OSU defense.

The offense, meanwhile — the one unit that has been most reliable historically — committed five turnovers. All five were attributed to Spencer Sanders, who rushed for 46 yards but, in reality, was running all game for his life. And worst of all … the body language, the morale, you could see it even from the television. Heads drooped, Gatorade towels draped. OSU was down early but by the looks of it, they were out even earlier. This was the scene every time the cameras panned to the OSU sideline.

I don’t propose this name-change on a whim. This is a trend. The Lethargic Cowboys these days seem to show up more often than did those Cardiac Cowboys. Remember last season, when OSU lost to Texas Tech, TCU, Baylor and Kansas State as favorites? Remember when OSU got punched in the mouth against those teams and then wilted? It was confounding. And Saturday was a mish-mash of those performances all bundled into one sad, hopeless showing. By the time OSU finally showed urgency, it was far too late into the game.

Remember that team from 2015-2017 that looked losses in the face and turned the other way? It’s gone and isn’t coming back. Here’s OSU’s record games closer than 10 points over the last few years … 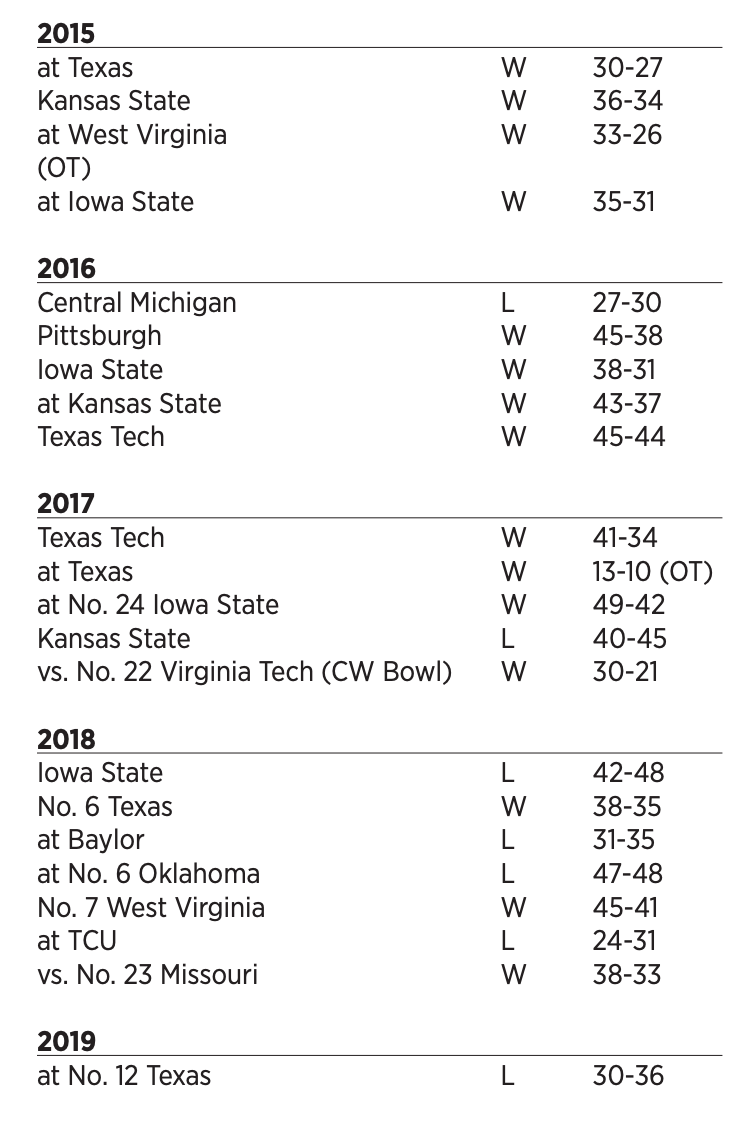 After those games last season, Mike Gundy had an excuse. Bad scheme. Poor coaching. You name it. But after Saturday, there’s no one to blame but the man in charge. Gundy said this offseason he intended to clean up some of the trends that did in the 2018 Cowboys. He wanted to fix the discipline. He wanted to #MakeSpecialTeamsGreatAgain (MSTGA). He wanted the coaching staff to hold players accountable, and for the coaching staff to be held accountable. It was all coach-speak. Maybe he wants to fix it, but Saturday showed maybe he can’t. Whatever messaging he used this offseason to try and rectify 2018’s issues lasted only a half-season before rearing their ugly heads again.

As the Tulsa World’s Bill Haisten wrote in his column on Saturday, there was a way the staff explained the loss. (Gundy: “We didn’t play very well. We gave up big plays.”) But after what we saw in 2018, isn’t it all just lip service if there’s no results? Gundy on Saturday said the three words you never want to hear: “We got outcoached.” What we saw against Texas Tech was the same team we saw against K-State, TCU, Texas Tech and Baylor last season — all games in which OSU was outcoached.

“I was aware of what was said during OSU’s postgame news conference,” wrote Haisten. “But this really is what I heard: “Blah, blah, blah.”

This isn’t professional football. I can’t (and refuse to) completely blame the players. Part of that is on principle. But in this case, it’s on merit. Oklahoma State was once a gritty program that showed up every game under Gundy — as underdogs, as favorites. It made no difference. But Oklahoma State the last two seasons is no longer the tough out it once was. Maybe it’s a lack of leadership. Maybe this game will wind up being a blip on the 2019 season’s radar. Maybe, just maybe, Mike Gundy’s lost his fastball.