If I saw second-seeded Oklahoma State take on first-seeded Saint Joseph’s in the 2004 NCAA Tournament, I sure don’t remember it. So, for your reading experience, I’ll watch this game as Kyle and Carson do so on their upcoming rewatchables podcast and give my thoughts as someone who doesn’t know a whole lot of what I’m about to watch.

• OSU was 30-3 entering this game and Saint Joe’s was 30-1. The Hawks lone loss came in the first round of the Atlantic 10 Tournament when Xavier thumped them 87-67. OSU hadn’t lost since Feb. 24 of that year, a double-OT loss to Missouri.

Based off that alone, Saint Joseph’s had been tested quite a bit more to get to that point. So, you could probably argue that two ways: 1) OSU is the better team. 2) Saint Joe’s would be favored in a close game given their experience against Tech and Wake Forest.

• Here are the starters for each team.

All of OSU’s starters apart from Bobik played in the NBA while Nelson, West and Jones had NBA careers after Saint Joe’s.

• The 3-point line being that close probably look like a layup for Dizzy.

• Nelson and West are quite the backcourt.

• Just over five minutes into the game the commentators are raving about how good a coach Eddie Sutton is. Wonder what would happen if you time-traveled back, told them you were from 2020 and that Sutton still wasn’t in the Hall of Fame.

• OSU is long and generally more athletic than Saint Joe’s. Cowboys are terrors on the boards and throwing a lot of lobs early.

• Tattoos were bad in this time period.

• That Allen make after his block above came with 14:22 to go in the half. OSU didn’t score another field goal until there was 7:26 left in the half. Twitter would’ve been hollering. It’s 21-13 Saint Joe’s.

• I didn’t notice the shorts being overly baggy until I saw a close-up of Terrence Crawford.

• A few sponsors I’ve noticed to this point: Pontiac and Cingular. What a time.

The Cowboys are struggling against the Hawks’ press. They’ll just try to dribble really fast then chunk up a prayer of a pass when they get in trouble and more often than not Saint Joe’s comes away with it. I believe Saint Joseph’s leads 16-0 in points off turnovers.

Interested to see what adjustments Sutton makes to combat the press.

• As soon as I clown on their 3-point shooting:

• “That was from way out there,” Nantz said with Bobik a foot and a half behind the 19-foot, 9-inch line. Trae Young would’ve been like an alien pulling up a few steps past half court. It would’ve been like when the ref watched the world’s first alley-oop on Semi-Pro.

• Cowboys come out like a house on fire. It would have been cool (and terrifying) to be in that locker room at halftime.

• OSU is so good on the glass.

• And Lucas finally hits a 3. It’s like a completely different offensive team came out of the locker room. The triple gives the Cowboys a 35-33 lead and started them on an 8-0 run in the second half.

• Joey Graham has a 11-point, 10-rebound double-double with 15 minutes to go. What a machine. He is similar to Cameron McGriff. Probably a better version, sure, but a 6-foot-7 guy who plays bigger than he is and does a lot of the dirty work.

• OSU also already has 30 team rebounds to Saint Joe’s 12. OSU’s turnovers are all that’s keeping this from being a slaughter, but credit to the Hawks’ defense.

• Every time a ball goes toward the basket, it’s like a high school team against an eighth-grade team on the boards. If it doesn’t bounce right to a Hawk, they aren’t getting it.

More Graham/McGriff similarities include the obviously strength both have. Also #GrahamJam and #CamJam make for good hashtags. Or pound signs as it was called back then.

• If you had the ball and someone was guarding you too close, you could elbow them in the face with almost no consequences.

• Nelson and West are dragging their team forward. 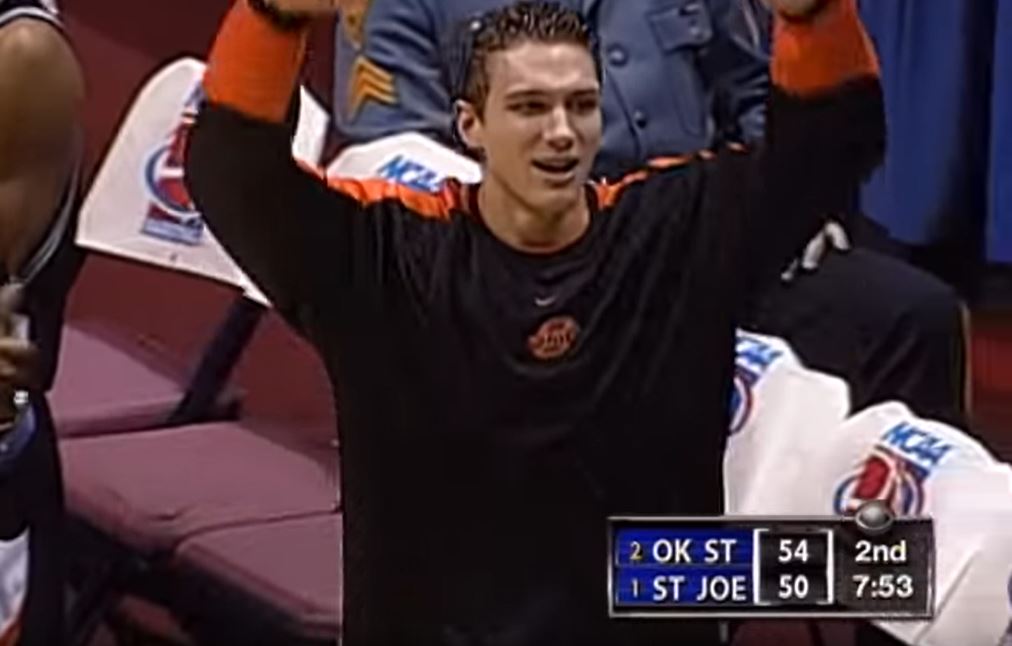 • Allen and Lucas have had up and down games, but in the final minute, Allen gets another block and Lucas hits a jumper to give OSU a 61-59 lead with about 40 seconds to go.

• Carroll answers with a 3. Spicy.

• Hey, there’s that show everyone has been hollering about. It takes a strong mind for Lucas to miss (and airball) as many 3s as he did in that game to just stone-cold hit a go-ahead with 7 seconds left. 64-62 Pokes.

• Saint Joseph’s not taking a timeout was an interesting call, but an understandable one when you think your guards are better than the opposition. No need in calling a timeout just for Allen to get matched up on Nelson or West.

• Let’s wrap things up here, shall we?

Joey Graham is my player of the game. Yes, Lucas and Allen are the stars of the team, but in this particular game, they turned the ball over too much. Graham and McFarlin kept the Pokes in it with their work on the glass.

I don’t remember Saint Joe’s using its press as much in the second half, probably after OSU started the half on the run it did.

The NCAA Tournament is such an awesome event. It’s sad it isn’t a thing this year, and it’s sad OSU hasn’t been that involved in it in a while.

One and done? Texas women bounced in the first round of ESPN’s simulated March Madness

Football Recruiting: Oklahoma State gets commitment from 2022 defensive back