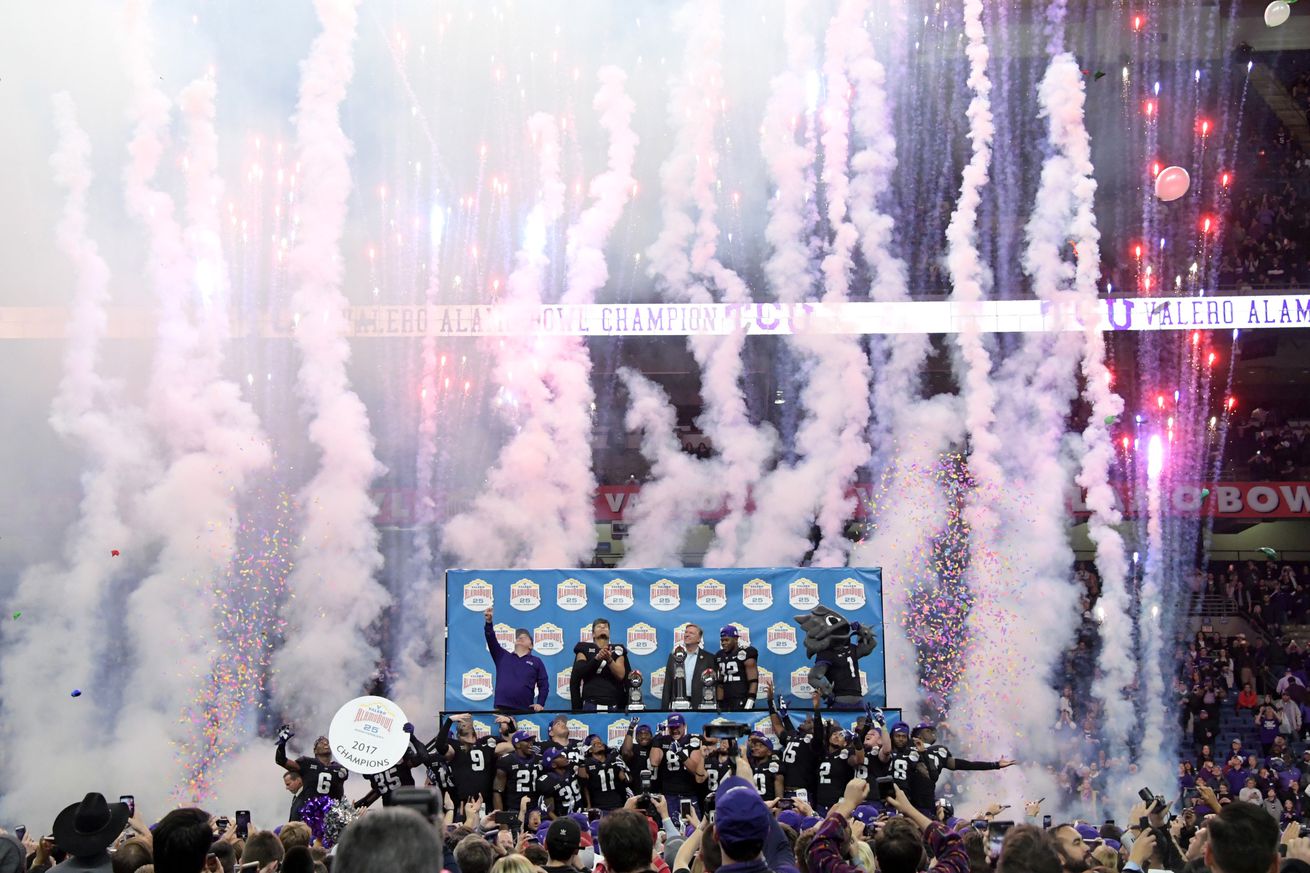 We know that the conference can bring the fireworks on the field, but what are their actual firework comps off of it?

The Big 12 Conference is known for it’s explosive offenses, bright stars, and big plays. So, why not celebrate the fireworks of the conference on the day we watch fireworks to celebrate ‘Merica?

The Snake is the worst firework, and Baylor is… well… the worst. The one firework most of us were allowed to play with until the adults had too many beers to care, it’s the time honored tradition of bored pre-teens nationwide. The Bears used to be full of fireworks, pomp with little circumstance. Under RUGGED FOOTBAW coach Matt Rhule, they are built for more of a slow burn. Plus, the snake kind of looks like cat poo, and that seems fitting.

There isn’t much to a popper; you throw it at the ground and it makes a disappointingly not-loud noise. That sounds an awful lot like Kansas Football.

Okay, you might be saying “sparklers are the most boring firework”. And, you would be right! They are boring! But they are also consistent, safe for children, and present at every Fourth of July celebration. Sounds a lot like the Wildcats under Bill Snyder, who rarely get the big boom, but it seems you can’t have a bowl season without them, and you know they’ll deliver more often than not.

They seem harmless enough, those little white tissues filled with gunpowder. But, you put enough of them together in the right hands, and they can raise quite a ruckus. The Cyclones have found the right hands in head coach Matt Campbell, and they seem primed to make a lot of noise in 2018, despite spending the last few years at the bottom of the box.

No one ever lights just one Roman Candle at a time – that isn’t what the Fourth of July is all about! No, you strap a bunch of those bad boys together, aim them in different directions, and fire at will. Unfortunately for the Big 12, that’s the Oklahoma offense right now – fireworks pointing in every direction and a light show that puts even America’s holiday to shame.

When I was a kid, my dad – I mean some random neighbor that I am definitely not related to – used to throw these in the grass in the backyard randomly just to freak my mom – I mean someone else that I am also not related to – out. The side effect was he was constantly repairing the grass and getting yelled at by that lady. That’s kind of like the Cowboys – they are going to make a ton of noise, leave plenty of pain in their wake, but at the end of the day, mom is going to yell at them, ground them, and send them to their room without dinner (mom is OU in this scenario). And also, you know that anyone with a mullet that glorious has tossed a cherry bomb or two in a port-o-john along the way.

You’re always surprised by how cool a spinner ends up looking, with it’s bright lights, flying sparks, and noises. The Frogs have been making a lot of noise nationally for the last several years, don’t necessarily have the big bang, but rarely disappoint. Of course, for TCU fans, the best fireworks memory is that time they ran out…

How prolific is @TCUFootball‘s offense this year? In yesterday’s 82-27 romp over Tech, we shot all the pyro we ordered…for the season.

Every city has one, the big fireworks show at the downtown plaza, where thousands of people crowd in, get a little too drunk, and hoop and holler as the big show goes off above them. It’s always disappointing, but no one ever admits it, and everyone always claims to have been there. Lots of Walmart t-shirts there, too, just like at a Texas game.

On one 3rd of July not too long ago, I was with some friends (legally, I promise) setting off fireworks. We had taken all the proper precautions, had the children a safe distance away, and were having a lovely time. Well, at one point in the evening, one of the fountains didn’t light properly, causing it to tip over and send rockets flying in every direction. Thankfully no one was hurt, but things could have gotten ugly, fast. That’s Texas Tech Football. It seems like everything is just fine, and then, out of the blue, everything goes wrong.

Yeah, they are unpredictable. They fire off into rooftops and car windows leaving a trail of destruction in their wake. Sounds an awful lot like Mountaineer Football under Dana Holgorsen! Part of what makes them so fun is that you know you probably shouldn’t be playing with them, and that they are way more enjoyable when deployed the exact way you aren’t supposed to. Also, burning couches weren’t eligible.

TCU News: “He was the type of guy where the NFL guys at the Under Armour game were impressed with him.”