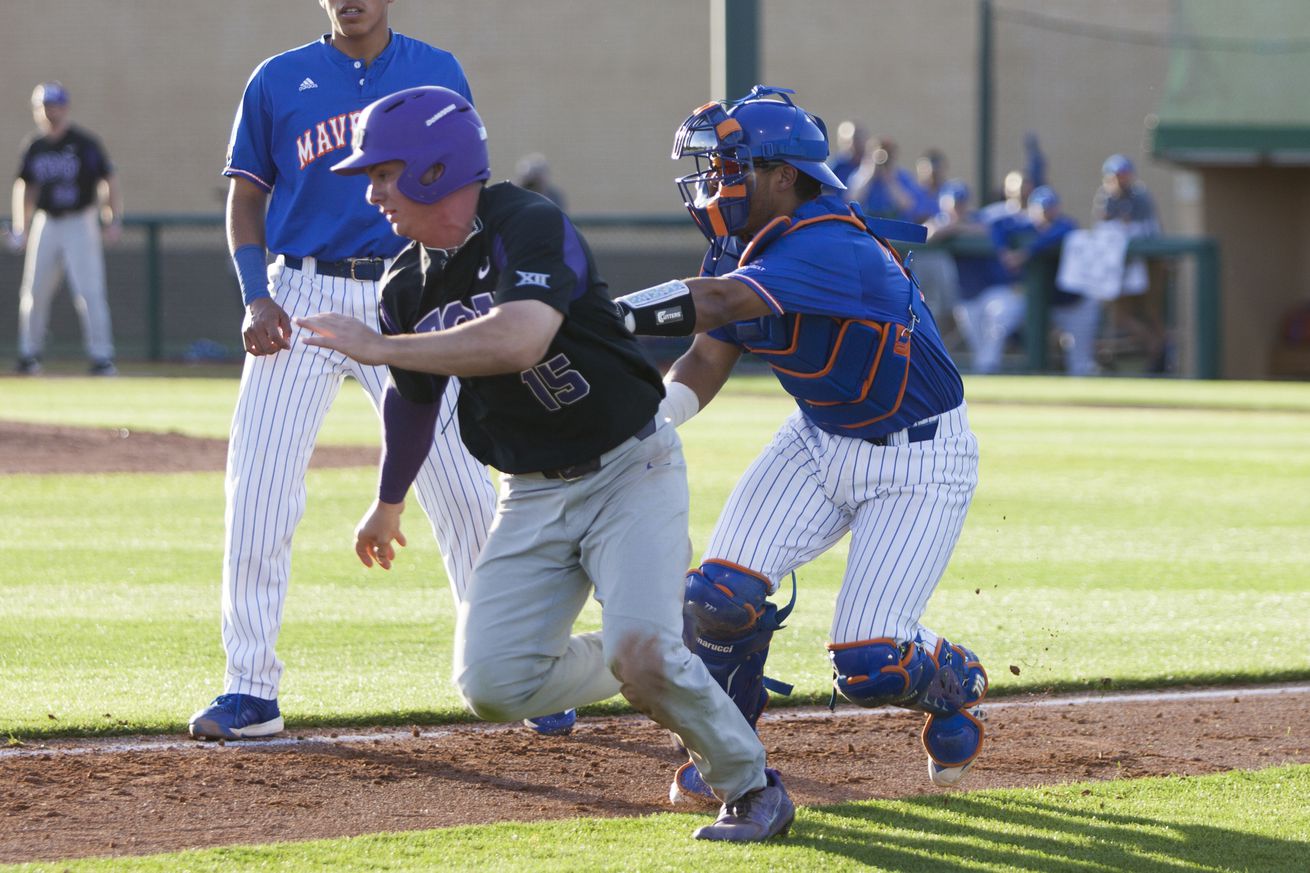 Things got dicey late, but the Frogs put one in the win column Wednesday night on the road.

The Frogs were a talkative and motivated group Wednesday, as the news of Luken Baker’s season-ending diagnosis seemed to galvanize the young team as they looked to get back to their winning ways against UTA in Arlington. A chatty dugout, aggressive base-running, and timely hitting allowed the Frogs to score in each of the first five innings, as the Frogs jumped on the Mavs early and often on their way to a 11-7 victory at Clay Gould Ballpark. A strong start was almost wasted by a sloppy finish though, as a five run eighth made things much closer than they needed to be.

TCU struck first with a run in the first, as Josh Watson singled, stole second, and scored on a Michael Landestoy single to right. Landestoy had a big night at the plate, collecting ** hits and pushing ** runs across the plate. Coby Bouwlare had a big night for TCU as well with a second consecutive three hit effort.

Also putting together a nice performance was starting pitcher Russell Smith. The freshman lefty got off to a nice start, striking out the first batter he saw. He capped a 1-2-3 first with another strikeout, and finished a four inning performance with four Ks. Smith allowed just one run – a solo shot in the second – and four hits, walking just one as well.

After struggling on offense a night prior, the Frogs scored in each of the five innings Wednesday, loading the bases three times total as they racked up ** runs on ** hits. Nine different Frogs had hits Wednesday the Frogs picked up quite a few free bases as well, with the help of eight walks and four hit by pitches. The Frogs got six RBI between Landestoy and Balta who had three a piece, but still stranded ** runners, as that problem continues to haunt them – though it wasn’t an issue Wednesday night thanks to exceptional pitching by the Frogs.

The big inning for TCU came in the fifth, when they struck for three runs. Connor Wanhanen opened things up with a walk, and Boulware followed with one of his own. Conner Shepherd loaded the bases with the help of an error, and after two quick outs, Balta wore one to start the scoring. Michael Landestoy followed the hit by pitch with a single up the middle, plating a pair of runs and making it an 8-1 ballgame.

Caleb Sloan relieved Smith in the fifth and pitched two scoreless innings, allowing three hits and striking out two. Augie Mihlbauer took over from there and threw one inning of one hit ball before turning things over to Notary, who struggled in 0.1 innings of work. Notary walked the first batter he faced before striking out the next, but proceeded to allow a single to left and hit the next two batters he faced, bringing home the second run of the game for UTA. That forced Schloss’ hand, who brought in Cal Coughlin in a game he probably would rather not have. With the bases loaded, Coughlin surrendered a double that scored two, and threw a wild pitch to allow in the fifth run of the ballgame for the Mavs. Things got to 9-6 after an RBI groundout, but after surrendering a base hit to left, Coughlin fought back and made a nice play on a roller to the third base side of the mound, executing a tough throw falling away from the bag to end the inning.

Johnny Rizer, who seems to be finding his groove as a lineup regular led off the TCU half off the ninth by absolutely smoking a ball to right field, off the wall just a few feet short of home. He would turn it into a run though, as the speedy outfielder never slowed down on his way to third, forcing a throw that sailed into the TCU dugout and allowed him to score. Adam Oviedo followed the triple and error with a clean double to left, and Wanhanen got in on the extra base action when his fly ball to left center popped in and out of the glove on a running grab attempt. The Frogs finished the ninth with three hits – triple and two doubles – a hit by pitch, and two runs added to extend their lead to 11-6. That gave a little breathing room for Austin Boyles, who came in for the final frame. Boyles got a quick first out before a tough hop at third put a runner on via infield single. After consecutive singles loaded the bases, the Frogs turned to the last pitcher available in the bullpen, Jake Eissler. After a leadoff single, Eissler got two quick outs and out of the inning – and the ballgame.

The Frogs didn’t put forth their best effort, but held on for a win after an emotional Tuesday. After the game, Jim Schlossnagle revealed that TCU had not only lost Baker, but Janczak as well – who could be out three weeks, or for the remainder of the season, depending on how an injury in his throwing arm progresses.

TCU travels to Baylor this weekend for a critical three game set, with their rotation and lineup in flux.

You can see postgame comments from Schloss and Connor Wanhanen below.

TCU News: “Blacklock would wreak havoc next to the franchise-tagged Chris Jones.”