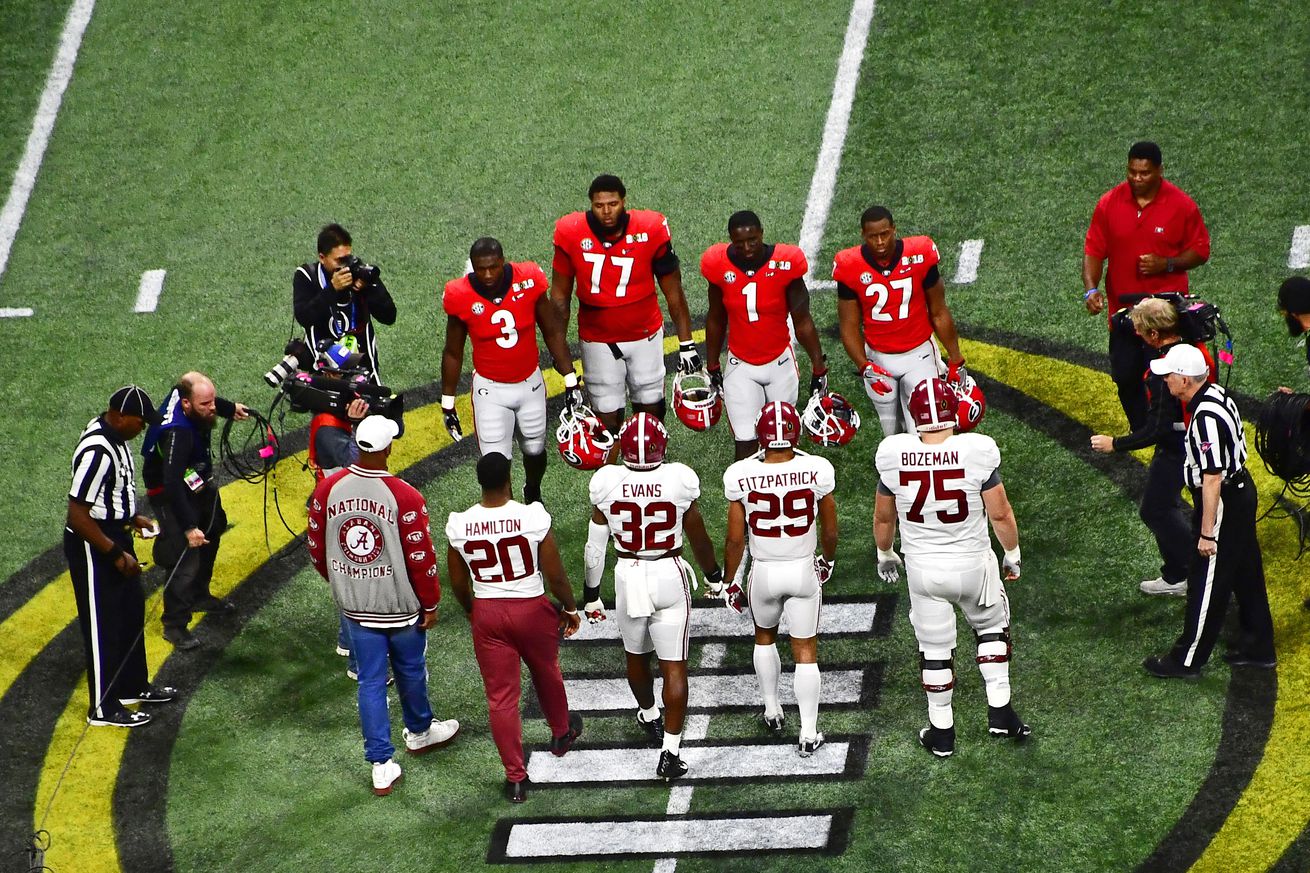 How healthy is the game?

Author’s Note – Just in time for summer, I’m kicking back up a Thursday column. Here, I’ll wander through some thoughts about football and analytics generally – “state of the game” kinds of things – and some more specific previews looking ahead to this fall, both in the Big 12 and around the NCAA. I’m always open to suggestions about college football data projects, so feel free to reach out in the comments.

Depending on what you read, college football either currently suffers from an an astounding lack of parity, or enjoys a period of unprecedented parity. (Bonus points for every time someone spells it “parody” in one of those links). Cursory internet research yields an urgency in the state of affairs, that parity is a necessary condition for an ideal college football world run by “blue-bloods.” College football is less an even playing field and more a ladder-match, with the advantages for success lying in concentrated power centers, most of those in the south east. Without assuming too much of a historical deterministic attitude, when it comes to college football success – money, recruits, coaching – the way things are is because of the ways things have been.

What does parity look like in college football? To answer that question, we must first answer one more fundamental: what has parity looked like in college football? Countless researchers in economics, public policy, sociology, and more immerse themselves in the notion of inequality: what causes it, how to fix it, what problems it raises. Those researchers have raised an array of measures and ‘quantifiables’ on inequality, perhaps the most famous of which is the Gini Coefficient. Conveniently, the Gini Coefficient is the tool most seamlessly applicable to this situation – a measure of who holds the wealth, in terms of population proportion. A Gini coefficient of 0 implies perfect equality; not necessarily an ideal, but more of a baseline, where every member in a group holds the same amount of wealth. Similarly, a Gini coefficient of 1 indicates perfect inequality – if one member held all the wealth, and all other members none, the Gini coefficient would approach one as the group size increased. TL;DR – Smaller Gini means more parity.

With a strong nod to this article (and to all six undergrad professors who made me memorize formulas and statistics like the Gini coefficient), let’s start with a simple survey of the modern college football landscape. An important note on methods – I’ve tinkered over the past few months with varying levels of a college football database. For this project, I’ve compiled team records, overall and unit efficiencies, and strength of schedule measures since 2005. This arbitrary cutoff signifies a few things: first, it more or less marks the lower limit of my cognizance of the college football landscape, and for that reason, I’m using it as a threshold for “modernity”. Secondly, and more truthfully – 2005 is the earliest year of metrics Football Outsiders has, and so here we are. Below, I present summary statistics on wins and losses over the last 12 years, and the Gini coefficients for each season, concluding with a discussion about the realities of college football parity.

No team in the last 12 years has won more than 14 games in a season; 12 have won 0 (two have done zero and 13 wins in that span – Washington making the playoffs and UCF pretending no mid-major has been successful before). As one might expect out of a zero sum game in a finite pool, mean wins is 6.6 – the average team has been bowl eligible.

The majority of teams lie between 4 and 9 wins every season – mediocrity punished by a cruel bounce or rewarded with a felicitous turnover shuffling wins across the pool of average teams. Is this what parity looks like? This histogram begins the process of uncovering college football’s topography, but is left wanting for insight.

Since 2005, 35 teams have won 100 games; Northern Illinois, South Carolina, and UCF are the only ones I wouldn’t have guessed – of course, Alabama sits at the top with a 3 game lead over Ohio State at 148. At the opposite end of the list, 19 teams have lost 100 games, with New Mexico State winning the crown at 121. Let’s look at a histogram of cumulative wins:

Again, we have a fairly well-behaved histogram; most teams fall in that 60-100 range over the last twelve years. The aggregation allows for an initial attempt at measuring inequality: the Gini coefficient of cumulative wins is .25911, certainly on the higher end. If college football were a country, its peers in inequality would be Belgium, Montenegro, Sweden, and Ukraine. The initial result decisively paints football in a positive light – it seems over the evolution of three recruiting classes (four years in college, stay with me), there have been ebbs and flows, starts and stops in success.

What about the evolution of that inequality? Below, I have plotted the inequality in each season, examining the spread of wins in single seasons.

No trend is apparent, but the extrema are worth considering:

The years with the most parity are 2005, 2008, and 2016. All three of those years featured a grouping of teams at the top, and plenty of conference championships decided by one game. That lead to a thick group of BCS contenders, all who had a case for a bid. In the case of TCU, remember the Frogs were a couple of field goals (2008), a baffling SMU loss (2005), and a [Kenny Hill everything? – ok yeah, this one doesn’t count] (2016) away from cracking the BCS.

Oddly enough, the years of chaos in college football – 2009, 2007, were on the side of the least parity. This suggests that the stakes were higher as there were fewer “good teams.” 2013, the year with the most parity, might sit dormant in TCU fan’s minds – the Carter was just a baby being rebuilt, and no one was sure about Boykin – but in terms of national scope, was quite competitive in the final year of the BCS: only 8 teams won at least 11 games, and the spread of teams in the final BCS polls was razor thin.

Applying the Gini Coefficient to college football’s broader conference landscape, we see a fairly widespread success across teams and conferences; in the 2000s, teams have risen and fallen regularly, and success has visited most teams at some point. This success of distribution confines itself, though, to regular season success; in terms of championships, the rich have gotten richer: The SEC has won 9 titles in this span.

So, what have we learned in 1000 words about college football parity? It’s not as big a problem as the internet would have you believe – in fact, in terms of wins inequality, the college football landscape is downright Scandinavian. At the top, though, not much has been shared. My conclusion: In college football, winning programs can be built, but championships are bred. College football titles are a function of history, program investment, coaching hires, and past success. For smaller programs like TCU, the recipe to get to the top of the pyramid – just keep winning.

Weber: Wade 'two weeks away' from being cleared

Where the AP voters have the Frogs