For several years there, Texas fans came to loathe the NFL Draft. It became an annual reminder how far the program had fallen.

Not a single Longhorn was drafted in 2014, and only one was taken in 2016 and 2017. To no surprise, those lean years mirrored the team’s woeful on-field results.

After three straight winning seasons, Texas is starting to gain traction again with NFL personnel. The Horns had three players taken over the last three days, making that nine players drafted in the last three years. It’s UT’s best three-year run since 10 players were taken from 2011-13.

What’s more impressive, these recent draft picks are sticking together in the league, proving their bond formed in Austin is unbreakable.

Receiver Collin Johnson was taken in the fifth round on Saturday by the Jacksonville Jaguars. He thanked Texas ex Charles Omenihu, a 2019 pick now blossoming with the Houston Texans.

“The one I want to give the most credit to is Charles Omenihu,” Johnson said. “He’s guided me through this whole process. He’s looked after me the whole time and has been checking up on me and telling me to stay patient.”

Johnson, who played in only seven games last season because of a hamstring injury, slipped further than he hoped. Still, he’s headed to the NFL. “It’s unreal,” Johnson said. “I’m just so thankful I got the opportunity with Jacksonville, and it’s almost surreal. I got the call and it made it all worth it.”

“He really worked hard in his time here at Texas to add strength and speed to that length, and did a phenomenal job,” Herman said in a statement. “He can high-point the football as well as anyone I’ve been around and has got great body control and ball skills.”

Johnson echoed similar thoughts from safety Brandon Jones and receiver Devin Duvernay, both selected in the third round on Friday. Jones was taken 70th overall by the Miami Dolphins; Duvernay was drafted 92nd overall by the Baltimore Ravens.

“DeShon (Elliott) literally drove over as soon as he saw me get drafted,” Jones said. “Kenny Vaccaro texted me, Quandre Diggs texted me, a whole bunch of guys have. I honestly haven’t gotten a chance to look through all my text messages.”

Duvernay is headed to a team loaded with Texas exes. Elliott is the youngster in Baltimore alongside Justin Tucker and Earl Thomas III. Duvernay will be a tempting target for NFL MVP Lamar Jackson.

“Got him on the phone, and man, he was all business,” Ravens coach John Harbaugh said Saturday on ESPN. “He was like, ‘Let’s go to work. When can I get my playbook.’ I think he feels like he’s got a lot to prove.”

Texas hasn’t produced a first-round pick since Malcom Brown went to the New England Patriots in 2015. That streak is likely to be broken next year, assuming Joseph Ossai or perhaps Caden Sterns have big seasons on defense in 2020. Left tackle Sam Cosmi is also on a collision course with the NFL.

From looking at all the picks, NFL scouts still know their way around the Lone Star state. Seven Texans were taken in the first round, and in-state players were being scooped up in droves as the draft progressed.

Baylor defensive tackle James Lynch from Round Rock was a fourth-round pick by the Minnesota Vikings. The Big 12 defensive player of the year was the 10th consensus All-American in school history and the Bears’ new all-time sack leader (22).

Lynch said he met a large swath of the Vikings’ staff and front office at the scouting combine and really wanted to land there.

NFL teams grabbed a slew of Texans to fill out their rosters in the sixth round. Baylor’s Bravvion Roy (Spring) was picked up by his former college coach Matt Rhule with the Carolina Panthers. The New York Jets drafted Texas A&M punter Braden Mann (Cy-Fair). The Ravens added even more to their offense by getting SMU’s James Proche (DeSoto).

The Big 12 had 21 players drafted, which ranked fifth among the Power Five leagues. The SEC had a conference-high 63 players taken.

As per usual, several more should be snapped up as unrestricted free agents. Texas defensive end Malcolm Roach, center Zach Shackelford and guard Parker Braun went undrafted. Roach was already planning on signing with the Saints, according to WWL radio. Most free agent pickups will be finalized Saturday night or Sunday. 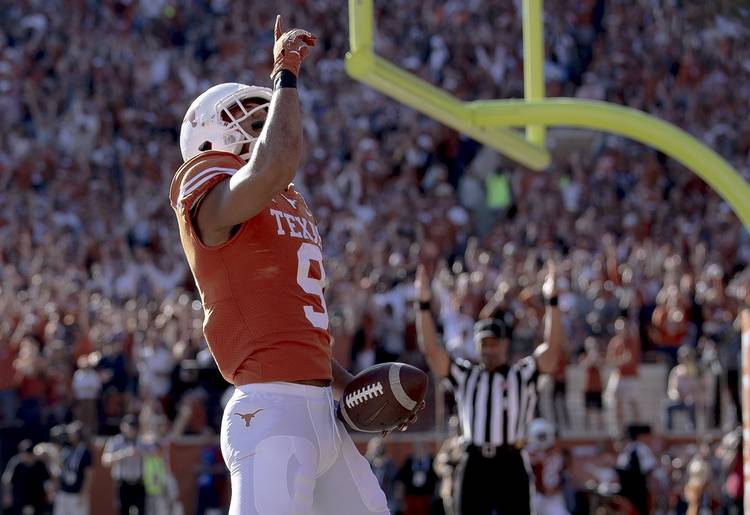 In offseason filled with transfers, men’s basketball looks toward a fresh season

BREAKING: Travis Bruffy signs with the Green Bay Packers as an UDFA

No. 5 Volleyball sweeps TCU in Fort Worth