So Tom Herman had the guts to pull the trigger.

Now can he do it again?

The shake-up was necessary after a disappointing 7-5 season and should at least temporarily change the narrative from a bad run of four losses in the last seven games to hope and anticipation of better days ahead.

Now the question is this. Will Coach Mensa have the wherewithal and fortitude to not only upgrade his coaching staff with outstanding, sure-fire and not safe hires, but also to trust them, relinquish his play-calling duties and be willing to totally revamp his offensive and defensive schemes?

That will take some guts. And bravado.

I think he has it within him.

In truth, he has little choice if he plans to survive.

He’s already gone this far, and there should be no looking back after what figures to be a massive makeover in names and games. Herman’s staff figures to have a radically new look in 2020. The same should go for the field.

I’d put USC offensive coordinator Graham Harrell at the top of the list on that side of the ball for his intelligence, his familiarity with the state and his prowess as an Air Raid disciple, but one who prefers a balanced offense. I think LSU passing game coordinator Joe Brady is a long shot at best because LSU head coach Ed Orgeron said Monday he’s a “step ahead” of potential suitors trying to hire the Broyles Award finalist.

Assume that to mean he’ll at least double Brady’s $400,000 salary and maybe even make him a co-OC  with Steve Ensminger. You don’t really think Coach O would let Herman bring his Longhorns into Baton Rouge next September with Brady calling the plays, do you?

Harrell probably would be a more logical choice anyway because USC head coach Clay Helton could be fired at an airport tarmac nearby at any time and is twisting in the wind at a school whose fan base wants to jettison him. Harrell fashioned a dynamite offense behind a freshman, third-string quarterback in Kedon Slovis.

Brady might bring some risks, too, because, at 30 he’s obviously bright and progressive but also has benefited from a fifth-year senior at quarterback in Joe Burrow and a cast of electric receivers. Orgeron said LSU has “a plan in place” to retain Brady and is “in good shape,” meaning hands off, Texas. Of course, when does Texas ever lose bidding wars?

There has to be other names Herman is vetting. Also consider that elite coaches might be busy working for CFP contenders, too, which could delay the timetable.

Much has been written about hiring former Rutgers head coach Chris Ash as defensive coordinator, but Herman probably could have already named him. Maybe Herman should consider a Kevin Steele from Auburn or a Jeff Hafley at Ohio State. Or bring on Charlie Strong and let USF foot the bill. Yeah, not happening.

If Herman replaces defensive coordinator Todd Orlando and offensive coordinator-in-name-only Tim Beck with big-time, savvy, bold new bosses and keeps his philosophy the same, Herman will be doing his program a big disservice. And himself.

Quite frankly, neither scheme was working.

He should embrace drastic change.

Texas has been the college football poster boy for inconsistency under Herman, Strong and the final years of Mack Brown. On both sides of the ball. While others — Baylor comes to mind — can trot out a three-man defensive front and still create a formidable pass rush, Texas has been unable to master that trick. Of course, it helps if you have an All-American like James Lynch and a likely All-Big 12 nose tackle like Brayvvion Roy like Baylor does to pull that off.

Texas had no one in its defensive front post more than 2.5 sacks this fall. Malcolm Roach, the cornerstone of the line, had just two and will long remember the potential sack of Max Duggan in TCU’s end zone that eluded him.

The Longhorns’ 22 sacks rank tied for 83rd in the nation. Only 10 Power Five teams were worse.

The pass defense was even more atrocious. True, the secondary had one crippling injury after another and no semblance of stability, and the 127th national ranking reflected that, ahead of only Texas Tech, UCLA and New Mexico. The tackling was equally subpar. But talent is there.

Texas twice fell behind 14-0 in the first quarter against both Kansas State and Texas Tech before rallying to wins, but that is very problematic.

The offense has been very erratic in the second half of the season. It stunk against TCU, Iowa State and Baylor down the stretch and looked great guns against Texas Tech and its struggling defense. Texas ran the ball well with more drive-blocking than we’ve seen this fall.

So where has that team been since September? Where have all the slant and crossing patterns over the middle been? Are passes to tight ends now illegal? Why did it take until Game 12 to dust off halfback passes and a reverse pass by Sam Ehlinger set out wide?

Now Herman has a chance to hit reset and start over.

Two sub-par, seven-win seasons sandwiched a stellar, 10-4 year, so it gives pause as to the real Herman program. Next year sets up as a strong year, if nothing else, based on 16 returning starters — nine of them on defense — an outstanding quarterback and a crackerjack staff. Hope springs eternal, right? Or least for another season.

The guess here is next August, Texas will be a Top 25 team because, well, it always is. The concern is will it still be, come December? 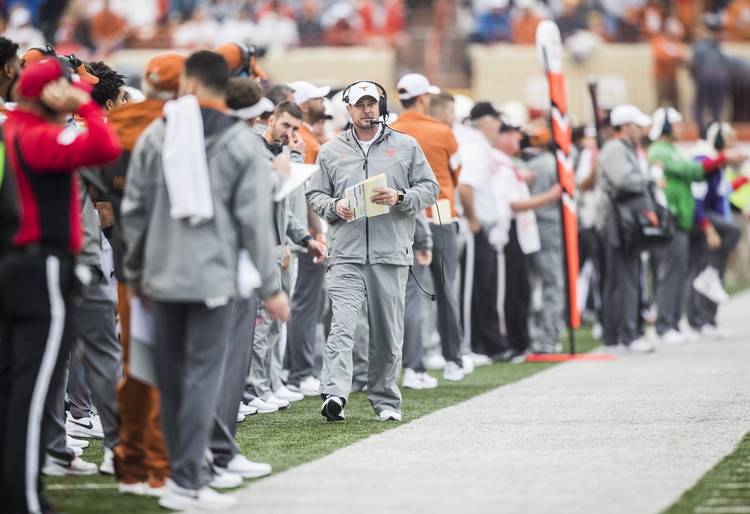