Already a legendary Longhorn, Earl Campbell has been named the seventh-greatest player in college football’s history.

The announcement about Campbell’s achievement was made at halftime of Monday’s national championship game. Texas’ Heisman Trophy-winning running back was honored in New Orleans alongside fellow legends like Roger Staubach, Barry Sanders, Archie Griffin and Herschel Walker. Syracuse great Jim Brown has been lauded as college football’s preeminent player.

Last week, ex-UT stars Tommy Nobis (No. 54), Ricky Williams (No. 57), Bobby Layne (No. 75) and Vince Young (No. 81) were recognized among the 150 best college football players of all-time. ESPN compiled the list in observance of college football’s 150th season.

Campbell won Texas’ first Heisman Trophy in 1977. Over 11 games that fall, Campbell ran for 1,744 yards and 18 touchdowns. Campbell led UT to an undefeated regular season but the Longhorns were beaten by Notre Dame in the Cotton Bowl.

From 1974-77, Campbell rushed for 4,443 yards and 40 touchdowns. (Campbell played in an era that did not count statistics from bowl games and he picked up an additional 302 yards in the postseason). Campbell currently ranks 69th on the NCAA’s all-time rushing list. However, only five players boasted more yards at the time of Campbell’s last game with the Longhorns.

Campbell was selected by Houston with the first pick of the 1978 NFL Draft. He went onto play eight seasons for the Oilers and New Orleans Saints. In 1991, Campbell was inducted into the Pro Football Hall of Fame. 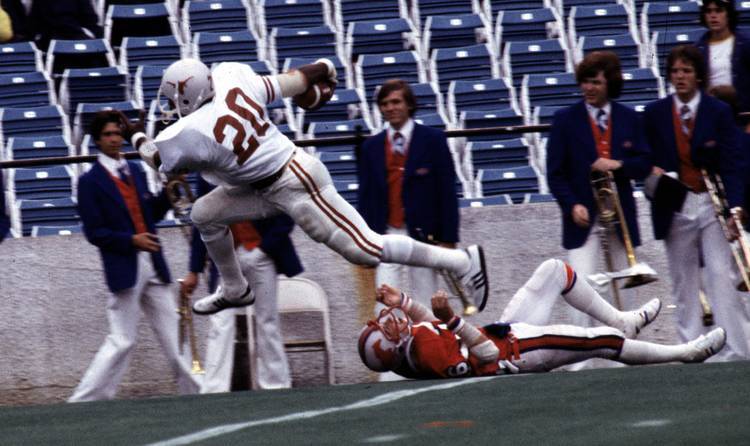