Friday’s home game against Texas Tech should be considered a starting line for Texas. Maybe the Red Raiders can even provide the starting gun as the race for the Big 12 title gets underway.

This year’s race won’t be a sprint. It’s not really a marathon, either. It’s more of a 65-day relay in which the 12th-ranked Longhorns will check their splits in Austin, Fort Worth, Waco, Stillwater and Lawrence.

Texas, the Big 12’s regular-season champion in 2018, is defending its crown against stable of steely suitors. None of the conference’s nine baseball programs enter this weekend with a losing record. D1Baseball has No. 11 Texas Tech, No. 12 Texas and No. 21 TCU ranked in its national poll.

Like many of its rivals, Texas heads into conference play with questions that need to be answered. Can the Longhorns find a solution for a .956 fielding percentage that ranks just 243rd nationally?  Can they develop more power in the lineup? How will the freshmen fare as the season gets longer and the stakes get bigger?

Also, what’s going on with the catcher position?

At the beginning of this season, it was expected that senior DJ Petrinsky would return to a position at which he started 51 times in 2018. Senior Michael McCann was going to be the veteran backup who could also play first base. Freshman Caston Peter made the roster but was not projected for much playing time.

Petrinsky, though, never caught because of a shoulder injury. Texas eventually shut him down for the season. McCann has also taken a beating, recently suffering a groin contusion at Stanford that left teammate Masen Hibbeler saying, “We don’t ever want to hear another man make the noise that he made in California ever again.”

McCann missed UT’s last three games, but Pierce says he is “ready to go.” His absence, however, did give Texas a chance to get an extended look at Peter.

Peter has appeared in eight games so far, and has had some noticeable struggles. Last week, six run-scoring wild pitches were thrown with Peter behind the plate. Pierce even chided the freshman during a recent meeting and told him that he needed to grow up.

Peter, though, may be in the midst of a growth spurt. Blair Henley, who’s expected to start the second game of the series on Saturday, said “Caston did awesome” during the junior pitcher’s six-inning start at Stanford on March 9. Pierce applauded Peter’s defensive blocking in Tuesday’s 17-3 rout of Texas Southern. Against the Tigers, Peter also went 2-for-3 with five RBIs and his first career homer.

“Coming out here every day, it’s just starting to get more and more comfortable with it,” said Peter, who added that he’s benefited from Petrinsky and McCann’s guidance. “The more you play, the more comfortable you’re going to get.”

The path to UT’s depth chart was not a straight line for either McCann or Peter. McCann was cut by Texas in 2016, but the Round Rock product reclaimed a spot on the roster the following season. Peter, who was the co-valedictorian at Houston Stratford, walked onto the baseball team after enrolling at UT as a student in search of a business degree.

McCann and Peter are now catching a pitching staff with a 2.96 ERA, and they’ve thrown out 10 of the 34 opponents who have tried to steal on them. Pierce said he’s had half the team try out to be an emergency catcher. However, he figured that “if the two of those guys can stay healthy, I think we’ll be very functional and we’ll be OK there.” 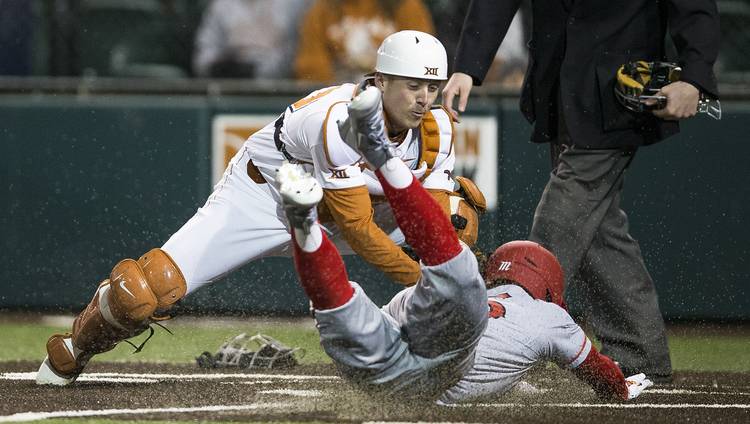 No. 5 Volleyball defeats No. 9 Kansas in Lawrence

Golden: In a must-win defeat, stumbling Texas made no case for an NCAA Tourney bid