When South Florida opens its 2020 football season at Texas next September, a reunion won’t occur at Royal-Memorial Stadium.

Former Texas football coach Charlie Strong was relieved of his duties at South Florida on Sunday. Strong went 21-16 and reached two bowl games during his three seasons with the Bulls.

South Florida went 10-2 during Strong’s first season, and the Bulls won their first seven games in 2018. The team, however, closed out the 2018 season with six straight losses. South Florida then went 4-8 this fall.

“I would like to thank Coach Strong and his staff for their hard work and contributions to our program,” USF vice president of athletics Michael Kelly said in a statement. “I have tremendous respect for Coach Strong and his dedication to recruiting and developing young men of talent and character and leading them with integrity. He has represented USF with dignity and class and we wish Coach and his family the very best.”

According to the Tampa Bay Times, Strong had two years remaining on the deal he signed after he was dismissed by Texas at the end of the 2016 season. In 10 years as a head coach at Louisville, Texas and South Florida, Strong has compiled a 74-52 record. He went 16-21 over a three-year stint in Austin.

What do you do when you beat a rival and earn a bowl game?

While Strong lost his job on Sunday, another one of UT’s former coaches had a good weekend. North Carolina routed rival North Carolina State on Saturday to become bowl eligible. The Tar Heels are led by former Texas coach Mack Brown, who inherited a team that went 2-9 last season. 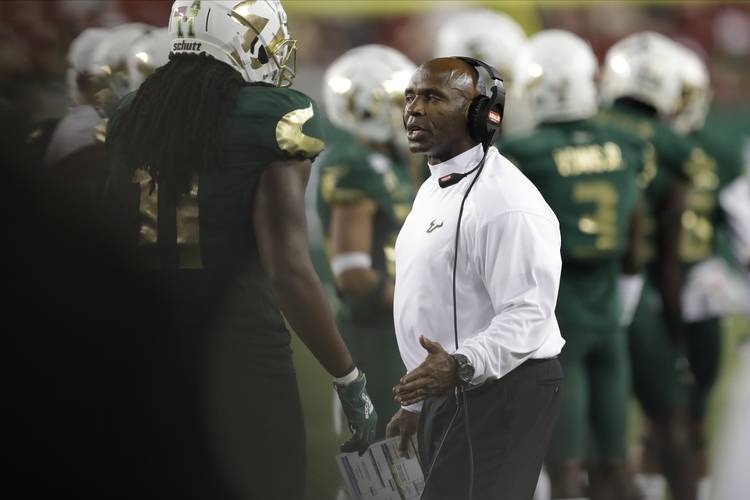 Women’s basketball falls to No. 15 Michigan State in fourth quarter