Andrew Jones settled into a chair in the Centennial Room at Bellmont Hall and met reporters on Wednesday for the first time to detail his year-long battle against leukemia.

In the same space normally reserved for UT’s biggest announcements, the Texas guard discussed his health, his return to return to school and the men’s basketball program — certainly a major highlight of 2018.

“One thing I stress is only the strong survive, and that’s been something I’ve lived by these last couple months,” Jones said. “It’s a choice whether you want to continue to go on and fight through adversity or you can just sit there and let it take over you.

Jones noticed a shortness of breath during practice late last December. Doctors began running tests, and UT announced his diagnosis on Jan. 10. The outpouring of support was overwhelming, as #AJ1 became a supportive hashtag and somewhat of a Big 12 battle cry.

Teammates hung Jones’ jersey in his locker and FaceTimed him after big wins and practices. The 6-4 athlete was not with the team but was nowhere near forgotten.

It’s unclear how much Jones, who was the team’s leading scorer briefly last December, will play this season. “I’m just going day by day,” he said. He also will miss a few weeks in December due to pre-scheduled, follow-up medical treatments in Houston.

Jones has navigated a sprained toe injury this month. He played seven minutes last Saturday in a closed scrimmage against LSU. Jones was 2 for 3 shooting and finished with five points, one assist and two steals.

“My biggest thing is never give up,” he said. “Like I said before, only the strong survive. If you’re strong-hearted and strong mentally, you can persevere through anything.”

Wednesday’s interview was months in the making. Men’s basketball media relations contact Scott McConnell and coach Shaka Smart had been fielding requests from all over. School officials weren’t going to do anything without Jones’ blessing.

Jones began by thanking the “Longhorn network, the Longhorn family, my coaches, they’ve been my biggest supporters throughout this whole thing. It really meant a lot to me. I have a great support system around here with my family and my team.”

Jones also publicly acknowledged what had been known behind the scenes.

Melinda Perrin, the wife of former UT athletic director Mike Perrin, was named to the UT MD Anderson Cancer Center Board of Visitors. Perrin personally made sure Jones would have the proper treatment at one of the world’s premier cancer treatment centers.

“I’d like to thank my doctors at MD Anderson,” Jones said. His primary oncologist is Dr. Elias Jabbour.

“My doctors had a great support system, had a great plan for me,” Jones said. “They reassured me I would be back playing within the next year. That was the main turning point, that he said I would be able to play again.”

Jones missed the spring semester, but the basketball season continued. ESPN’s “College GameDay” came to Austin on Feb. 3 for the Texas-Oklahoma matchup. AJ1 was a main focus of the network’s pre-game show. Then the Horns went out and upset the 12th-ranked Sooners 79-74.

“I was really in and out of it,” Jones said. “The first two months, I really don’t too much remember what went on.” But he did remember Jan. 10. That night, after Jones’ diagnosis was public, TCU’s Jaylen Fisher missed a potential game-winning layup as Texas escaped with a 99-98 double-overtime win.

Thousands in private donations were raised to help Jones’ family offset medical costs. Jones said he “could not be more grateful” for all the support his family received.

“It was surreal to me,” he said. “I didn’t realize it would draw this much attention. There’s a lot of people across the country suffering the same disease, if not worse than me. So for them to actually go out of their way to support my cause and support me and my family, it meant a lot.”

Now, he can focus on getting back to normal. “Things aren’t never going to be normal, but it feels good. I’m getting used to it,” he said.

Jones is excited to be a Longhorn again. He joked about seeing teammates that got bigger and stronger during the offseason. He knows he’s got to spend a lot of time in the weight room getting his strength and conditioning back.

Beating cancer is no small feat. Nobody in the Big 12 will be as forgiving, though.

“They have no choice,” Jones said, “because I’m coming at them full-throttle.” 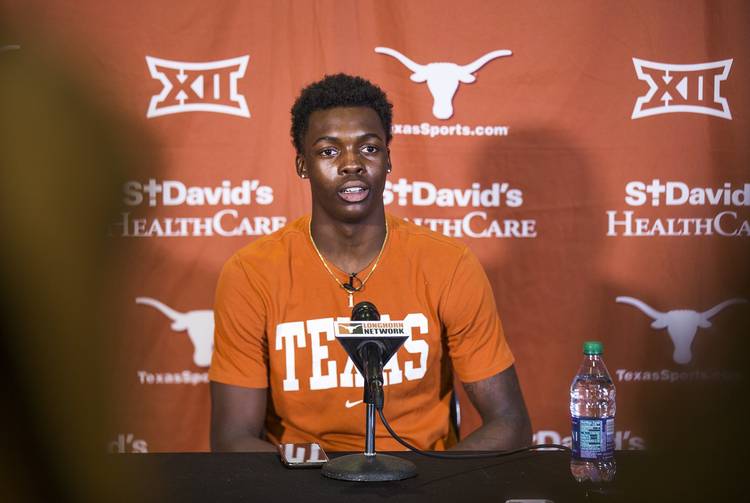 Golden: In Acho vs. Boyd, a Texas ex tackles the loyalty vs. business quandary at ESPN

Store Update: PFB Has a New T-Shirt Available for Purchase

Bohls: Texas-OU is closer than this year’s betting line suggests