Texas and Oklahoma have faced each other 214 times in their Red River baseball rivalry history, but on Friday, the Longhorns suffered one of their worst losses ever to the Sooners — a 13-0 rout that was both historic and season-ending at UFCU Disch-Falk Field.

In a game that the Longhorns had to win, Oklahoma homered four times, handing Texas its most lopsided loss ever to the Sooners and eliminating the Longhorns from any hope of getting into next week’s Big 12 tournament.

Texas (26-27, 6-16 Big 12) will end its season Friday night after the second game of the doubleheader. The last time the Longhorns failed to make the postseason was 2016, Augie Garrido’s final season. The last time they didn’t make the conference tournament was 2013.

“We looked like we were not ready to play today,” lamented UT coach David Pierce. “I don’t know how you can never be ready to play when it’s Texas-OU at home, but that’s what it appeared to look like and that’s how we played. It’s unfortunate.”

After Thursday night’s 4-2 loss to the Sooners, both Pierce and pitcher Bryce Elder spoke about playing for pride even with the team’s dwindling postseason chances. Texas entered this final series of the regular season needing to sweep the Sooners and get some help from Kansas, which is hosting Kansas State. The Longhorns still could have gotten in by taking two of three games if the Jayhawks had swept the Wildcats.

One day later, however, the Longhorns didn’t appear to put up much of a fight. They managed only four hits off OU pitchers Levi Prater and Wyatt Olds. And Texas gave up 15 hits — a season-high — and gave up 10 walks, third-most in a game this season.

After scoring an unearned run in the first inning, the Sooners kept their foot on the gas pedal. Oklahoma, which entered the game with a conference-low 23 home runs, homered in the second, fourth and fifth frames, and Brady Lindsly’s two-run shot in the seventh gave the Sooners a 12-0 lead.

Oklahoma’s 15 hits came against five UT pitchers. Henley, a draft-eligible right-hander who may have made his last-ever start for the Longhorns, lasted only 1 1/3 innings.

“We didn’t pitch well early. We just didn’t play defensive baseball behind Blair (Henley),” Pierce said. “That with their young (pitcher) doing a great job, it was an ugly ballgame. … Right now, it’s all about evaluating players and evaluating attitudes. It’s very obvious this next game is our last game, and we’ve got to start preparing for next year.”

Around the bases: Harlan, who spent the 2016 season at Texas, scored twice for Oklahoma. … Duke Ellis was responsible for half of UT’s hits. … Senior Brandon Ivey pitched a career-high three innings in relief. … Earlier in the day, Texas received a verbal commitment from San Jacinto College sophomore infielder Camryn Williams. 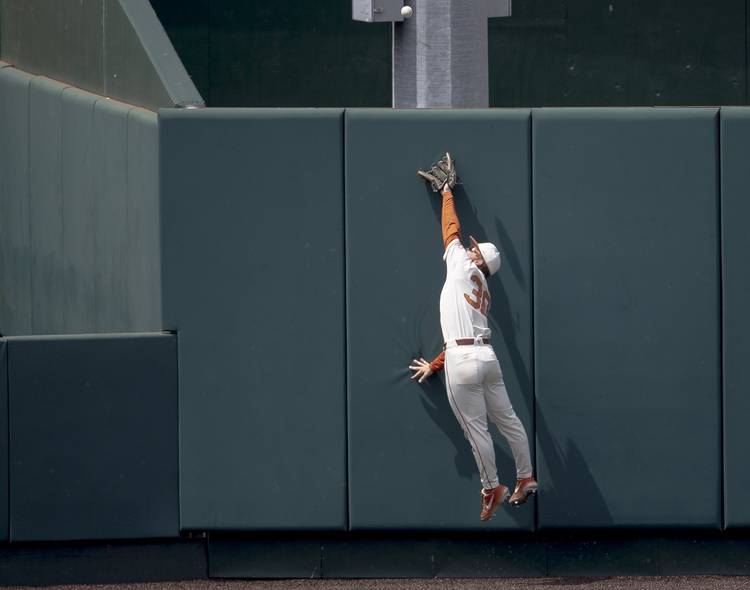