We’re 54 days away from the 2019 season opener, but it’s never too early to talk college football. We kick off our 11th annual countdown series of our preseason Top 25 as selected by the American-Statesman sports staff. Last year’s eventual CFP semifinalists ranked 1st, 2nd, 8th and 13th in our 2018 poll.

Our No. 22 team: Northwestern

The Wildcats’ best-case scenario: Coming off an appearance in the Big Ten championship game, there is reason for optimism. The key is finding a replacement for former QB Clayton Thorson, now in the NFL. The most likely successor is Hunter Johnson, a former five-star recruit (2016) who transferred to Northwestern from Clemson last year. If the Wildcats can survive the first half of their schedule — against teams such as Stanford, Wisconsin and Ohio State — a 9-3 record and a mid-level bowl could be in the cards.

And their worst-case scenario: Worst case? Beginning the season on the road against Stanford highlights a brutal stretch of September and early-October games. It will be difficult to replace all the skill position players who have left. If they don’t get suitable replacements, the Wildcats will struggle to get a bowl bid with a 6-6 record.

Spring cleaning: Multi-purpose back Cameron Green retired from football in February, citing head injuries sustained during his career. He had four touchdown catches last year. … Fitzgerald hired Kurt Anderson as the new offensive line coach. The Chicago native spent last season as a quality control analyst for the Wildcats, helping the ‘Cats earn their first-ever Big Ten West title. … One of the most impressive players during spring camp was CB Greg Newsome II, who saw ample playing time as a freshman last year. Coaches are also high on DE Joe Gaziano, who has 16.5 sacks the past two seasonw to go along with seven forced fumbles.

Bullish on Bowser: Bowser was a pleasant surprise last year after taking over running back duties for Jeremy Larkin, who was forced to retire due to cervical stenosis last September. If Bowser gets the bulk of the carries, he should challenge for 1,000 yards and all-conference honors. He averaged 108 yards in his final eight games.

Fitz is on a roll: Fitzgerald is the first Northwestern coach since Ara Parseghian (1956-63) to post an overall winning record, going 96-70. He’s also only the fourth to take the Wildcats to a bowl game and the only one to win four postseason games.

This and that: Fisher is one of the best LBs in the Big Ten. Northwestern was the least penalized team in the nation in 2018. The Wildcats were 5-1 in Big Ten games decided by seven points or fewer. … On offense, only two starting linemen return from last season — center Jared Thomas and tackle Rashawn Slater.

The key game? Oct. 26, vs. Iowa. The winner of the ninth game of the season will have the inside track for conference honors.

No. 25: Stanford will need its experienced defense to lead the way early

Our Top 25, by conferences

Coming tomorrow: Our No. 21 team

This school led the country in passing last year, averaging nearly 375 yards per game. And its quarterback is coming back. 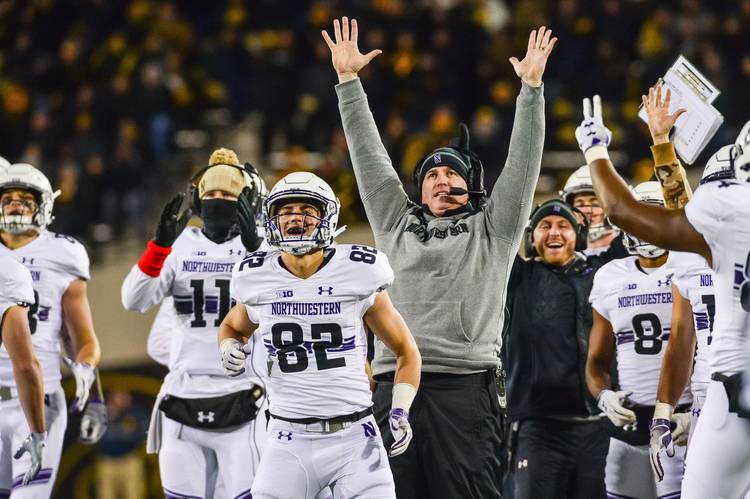 No. 14 Soccer stays unbeaten with 3-0 victory over Northern Colorado

Unsportsmanlike decision?: Should throwing the ‘Horns Down’ be a 15-yard penalty?