We’re 49 days away from the 2019 season opener, but it’s never too early to talk college football. We kick off our 11th annual countdown series of our preseason Top 25 as selected by the American-Statesman sports staff. Last year’s eventual CFP semifinalists ranked 1st, 2nd, 8th and 13th in our 2018 poll.

The Cyclones’ best-case scenario: The Cyclones, with an experienced offensive line, field a defense designed to thwart the conference’s big-play attacks. It finally helps the team win big games late in the season to land a spot in the Big 12 championship game.

Spring cleaning: Campbell has been a buzzy name in coaching searches the last two years. The Des Moines Register reported that six NFL teams contacted Campbell, who is headed into his fourth season in Ames. Plus Ohio State reportedly looked at him before elevating Ryan Day to replace Urban Meyer. Iowa State rewarded Campbell with another contract extension, although he didn’t receive a pay raise. Instead, $1 million was added to the salary pool for his assistants. It’s now almost $4 million, placing Iowa State’s collective assistants’ salaries among the nation’s top 30. Campbell’s deal is good through 2024. … Iowa State took some significant hits in the draft, losing stars Montgomery, (third round, Chicago) and Butler (fourth round, Chicago). Both players still had eligibility remaining. … The Cyclones might’ve found Montgomery’s replacement in this year’s recruiting class. They signed two four-star tailbacks in Breece Hall and Jirehl Brock. There are four possible candidates in mind for Butler’s big spot — Tarique Milton, Deshaunte Jones, La’Michael Pettway and Darren Wilson. Milton, a sophomore, caught 34 passes last season. Jones, a senior, posted 43. Pettway and Wilson are newcomers who signed in May. Pettway is a graduate transfer from Arkansas. Wilson is a former JUCO player.

One stout defense: Jon Heacock, the Cyclones’ defensive coordinator, has fared well in shutting down opposing offenses. He calls his scheme a 3-3-3, meaning Iowa State will use three down linemen, three linebackers and three safeties. It’s worked the past two seasons, with the Cyclones ranking second in the Big 12 in 2018 in total defense, allowing 349 yards per game. In 2017, the Cyclones were third at 366.2. The most important stat probably is scoring defense. Iowa State topped the league in allowing only 22.9 points a game. Heacock will be able to build this year’s defense around safety Greg Eisworth, last year’s Big 12 defensive newcomer of the year, and linebacker Mike Rose, whose 75 tackles were the third best among freshmen from Power 5 teams.

Rewarding the fans: It’s a good time to be a Cyclones fan. Iowa State won five straight league games last season for the first time in school history. The streak, which launched after the team was 1-3 to start the year, lifted them to a second straight eight-win season. For context, from 1979-2016, Iowa State had only one season of at least eight wins.

Purdy good: Quarterback Brock Purdy will try and continue his winning ways as a sophomore. He helped turn the Cyclones’ season last year. His marquee game was an upset of then No. 6 West Virginia. Overall, he completed 66.4 percent of his passes for 2,250 yards. His stats are third best in the Big 12 among returning quarterbacks, behind Texas’ Sam Ehlinger and Baylor’s Charlie Brewer. Purdy won’t have the luxury of having Montgomery and Butler. But he does have the protection of five returning starters on his offensive line.

The key game? Nov. 9, at Oklahoma. The Sooners are the big dogs of the Big 12 and it’ll be one of the final road tests of the season.

No. 25: Stanford will need its experienced defense to lead the way early

No. 20: With no proven quarterback, Wisconsin will ride the legs of Jonathan Taylor

No. 19: With Jarret Stidham in the NFL, Auburn must choose a freshman quarterback

No. 18: Army might end up throwing a real wrench into the CFP’s plans this year

Our Top 25, by conferences

Coming tomorrow: Our No. 16 team 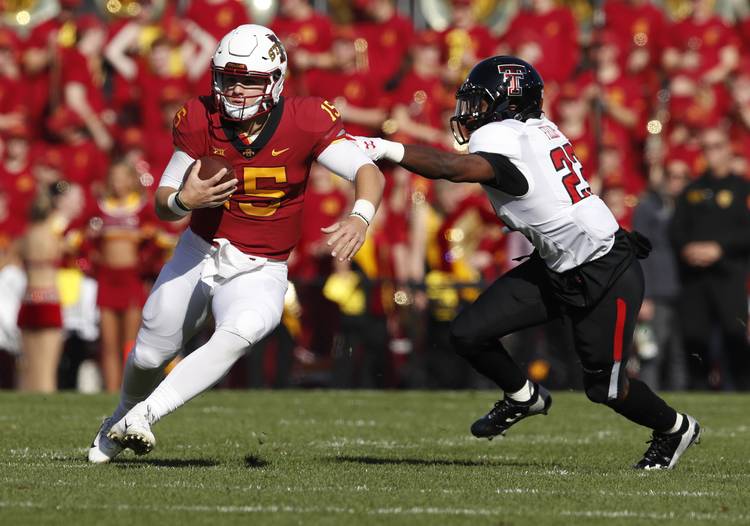 No. 3 JUCO OLB Caleb Johnson commits to Texas over Oregon, others