Recently, Texas sophomore Jhenna Gabriel had to wake up for a final that began at four in the morning.

Gabriel compared her final project to the TV show “How To Get Away With Murder,” but “for advertising and public relations majors.” Gabriel and five classmates were tasked with creating a fake portfolio for a real company. They had to design strategies, budgets, expansion plans and marketing ideas for Round Rock Honey.

“My team didn’t end up winning at the end,” Gabriel said. “That was a bummer, but we did pretty good. We got a pretty good grade on it, so there were no complaints.”

Time differences aside, there are probably worse places to spend a global crisis than Honolulu. The beaches had been closed until recently, but Gabriel’s family has a pool. Temperatures have hovered in the 70s and 80s for the past two months.

There isn’t much volleyball, though. And that has been a problem for Gabriel.

From Florida to Hawaii, we may be separated, but we still pepper together

At UT, the football team wasn’t alone in its loss of spring practices. The school’s volleyball and soccer programs also had their off-seasons altered.

The volleyball players had some individual workouts before things went awry in the middle of March. Most of the team practices were canceled. Scrimmages against Rice, Texas State and Texas A&M were called off. All of those programs made last season’s NCAA Tournament. Texas also lost out on an opportunity to fully integrate Nebraska transfer Capri Davis and early enrollee Naomi Cabello into the program.

“Spring season is something that we really look forward to because when you head into spring training, it’s a grind,” Gabriel said. “You’re really training, you’re getting stronger in the weight room and you’re working on a few stuff on the court. It’s a lot of hard work and it’s really taxing.

“Spring season is kind of like the light at the end of the tunnel where you get to show off all of your hard work that you’ve done in the spring a little bit before our actual season in August.”

Five of the 10 players on UT’s spring roster are Texans. The other Longhorns were raised in Florida, Illinois, Iowa, Tennessee and, of course, Hawaii.

With his players separated by miles and time zones, coach Jerritt Elliott has learned on the leadership of Logan Eggleston and Ashley Shook. Eggleston and Shook will be the team’s captains this year. Eggleston earned All-American honors as a sophomore this past season. Shook is the program’s only rising senior.

Over the past few months, Texas has been able to conduct regular meetings over Zoom. Virtual workouts led by the players have become a new norm. The Longhorns have also used social media to communicate, encourage and hold each other accountable.

As for actually getting better at volleyball, that’s a trickier topic. Elliott pointed out, “They can’t replicate what they do (on the court). … It’s definitely going to take some time to knock off the cobwebs when they come back.”

Without access to gyms and courts, the Longhorns have gotten creative. Elliott said sophomores-to-be Molly Phillips and Skylar Fields have played some beach volleyball. Libero Sydney Petersen can participate in backyard games with her twin sister, who is an outside hitter at Northern Iowa. A few players have found boards to play games of pepper against.

When she was younger, Gabriel hated when he father made her set a volleyball into a basketball hoop. But that drill has recently become more appealing. Gabriel and her father, Darryl, have held practices at a nearby park a few times each week.

“My dad, he’s really been doing the thing. He still has a good shoulder on him, and he’s been hitting balls at me so I can dig a little bit,” said Gabriel, who averaged 10.5 assists per set during 2019’s all-conference campaign. “I think we’ve been doing the best that we can given the circumstances.”

Texas is only a few months removed from a stunning loss to Louisville in the third round of the NCAA Tournament. Immediately following the earliest end to a UT season since 2005, Petersen told reporters that “It’s time to go back to the gym and get better.”

But have the Longhorns been able to get better this off-season? Has the unexpected break extinguished the team’s competitive fire?

“I think that if anything, this whole thing has made us hungrier than ever,” Gabriel surmised. “We are all foaming at the mouth to get back on the court and do what we love. I think this type of adversity is going to make us stronger than ever.” 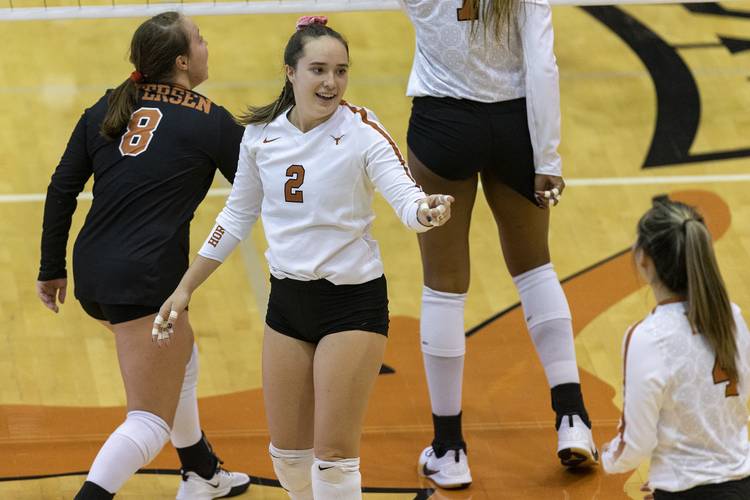