On a historic night at UFCU Disch-Falk Field, Texas went about its business as usual.

Given an early lead to work with, Bryce Elder registered double-digit strikeouts in Friday’s 7-0 win over Boise State. The victory was the sixth of the season for an undefeated Texas team. The loss, meanwhile, was Boise State’s first in nearly 40 years.

Boise State was playing for the first time since it discontinued its baseball program after its 1980 campaign. While Boise State was on its hiatus, Texas recorded 11 6-0 starts.

“Really clean game,” Texas coach David Pierce said. “We played great defense. When we had the plays, we made them. And Bryce was Bryce Elder, he was outstanding.”

The Broncos’ bats had little time to shake off four decades worth of rust and dust as Elder assumed his normal spot in the Texas rotation. On 11 pitches, Elder sat down the first three batters in Boise State’s batting order. The Broncos opened the second inning with a walk and single, but Elder then strung together 11 consecutive outs.

Elder ended up giving Texas seven innings on a chilly evening in Austin.  He allowed only three hits and struck out 11 batters.  A reliever as a freshman and a starter this past spring, Elder was also involved in his first shutout for Texas.

Throughout the day on Friday, Elder said he kept pestering UT pitching coach Sean Allen for intel on Boise State. Allen had few answers about the resurrected Broncos. Pierce said some scouting was done during Boise State’s batting practice, but Elder was forced to mostly make up a scouting report as he went.

“It was just kind of go out there and pitch to my strengths and read swings as the at-bats went,” Elder said. “I think we did that pretty well tonight.”

An all-conference pick in 2019, Elder opened his junior year last week with a four-hit outing at Rice. Elder threw 84 pitches in the opener but upped that workload to 106 pitches on Friday. Elder had five 100-pitch outings in 2019, but his first wasn’t recorded until his fifth start.

“I thought I was at 85 pitches, honesty. I thought I was going to be able to go back in the eighth,” Elder said. “Me and (strength coach Matthew Couch) have been working hard since the beginning of the fall. We’re still going at it and just sticking with it and eating, not right, but more right.”

For the fourth time this season, Texas snagged a first-inning lead. The first two Longhorns to face Boise State’s Travis Weston got aboard, and Zach Zubia brought them both home with a ground-rule double. The Longhorns scored again in the fourth and fifth frames before a three-run eighth inning put the game away.

Around the bases: Dawson Merryman and Jared Southard closed out UT’s second shutout of the season. Merryman was nearly immaculate during the eighth inning, but Boise State’s Geon Hyoung Kim grounded out on his ninth pitch. … Georgetown native Cole Posey went 0-for-3 and started at shortstop for Boise State. … Four Longhorns stole a base. … Texas sophomore Ty Madden (1-0, 0.00 ERA) will be opposed by Boise State’s Mitch Lines on Saturday afternoon. UT will honor Andre Robertson, the first black baseball player to earn a scholarship at Texas, as part of its “History Makers” series. 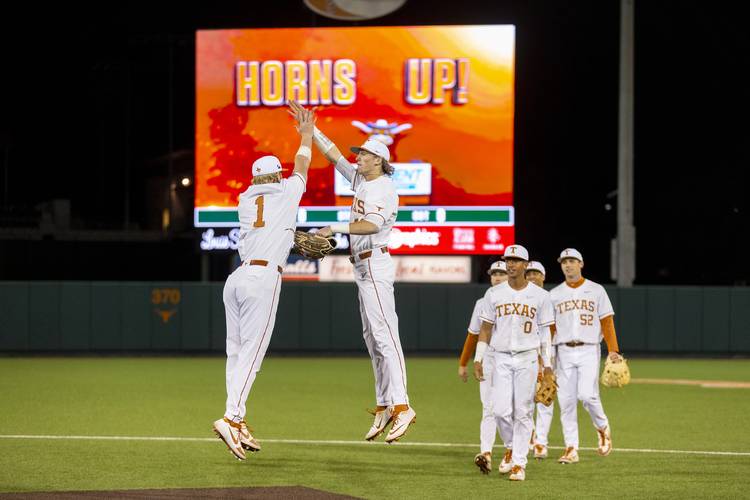