Every game, even those in mid-November, has teachable moments. Whether anyone chooses to learn from them is solely based on the individual.

Take Kerwin Roach II as an example. The Texas senior had a frustrating start Friday against the Citadel and was 0-for-5 from 3-point range by halftime.

“Just stay with the process,” Roach said. “Keep shooting open shots. Take the shots I always practice on and help my teammates.”

Roach finally got going in the second half, hitting three from downtown and becoming the 37th player in UT history to score 1,000 points in a 97-69 win.

The player nicknamed “Snoop” finished with 15 points. He’s likely to pull ahead of Royal Ivey (1,036), Brad Buckman (1,102) and P.J. Tucker (1,169) on the UT scoring list at some point this season. Four others finished in double figures as Texas (4-0) ran away with things in the second half.

It wasn’t an ideal start. Texas opened 3-for-12 shooting and 0-for-6 from long range. The Horns finished the first half having made just two of 21 3-point shots — a dismal 9.5 percent.

These weren’t contested shots, either. These were open shots around the perimeter that Division I scholarship players should make. “They’re literally just encouraging you and daring you to shoot that ball,” UT coach Shaka Smart said.

The only way Smart’s bunch kept it close was through defense and rebounding. The Citadel (2-2) had a 16-12 lead with 12:37 left before halftime but could never really pull out too far ahead.

“I don’t know if our guys know it yet, but that’s our identity,” Smart said.

Eli Mitrou-Long sparked a 21-3 run that spanned 5 minutes, 30 seconds and gave the Horns a 14-point cushion. Things happen when he’s on the floor. It’s the second time this season Mitrou-Long’s gotten within shouting distance of a triple-double (nine points, seven rebounds, six assists).

Stay with the process. Maybe that should be this team’s battle cry. It certainly fits sophomore Jase Febres.

Febres’ best moment in burnt orange came last season against Baylor. He scored 18 points in the first half by hitting four 3-pointers. The shocked look on Baylor coach Scott Drew’s face was unforgettable. For one night in Waco, Febres was a star rocketing across the night sky, rarely seen again.

Like Halley’s Comet, Febres showed himself again in the second half against the Citadel.

Febres didn’t shy away from the fact that Baylor was his one shining moment. “It’s motivation every game. I hear that a lot. One half. Doesn’t come out the second half. Doesn’t produce,” Febres said.

The 6-foot-5 guard knows he’s simply got to become more consistent. The Horns need him to be the offensive weapon he was signed to be — a consistent outside scorer to help with floor spacing and pull defenders out of the paint.

The veteran with 1,005 career points had sage advice for the underclassman with 136.

“At one point and time, I was just like him, just not confident in my shot until I saw a few go in,” Roach said. “You’ve just got to stay confident, keep shooting and be ready to shoot. He took a major leap in that in a lot of areas, and it’s going to show this season.”

Prayers for Memphis: On Friday, Texas guard Andrew Jones played the final two minutes against the Citadel and drew another standing ovation. He continues to win his battle against leukemia. Memphis player Karim Sameh Azab tragically was not.

Azab died Thursday after an eight-month battle against the disease. He was 22. Memphis officials announced last April that Azab had been diagnosed with Stage IV cancer following the 2017-18 season. Jones had been in contact with Azab, originally from Giza, Egypt, during his own recovery.

“It’s just terrible news of his passing,” Smart said. “Just wanted to send our thoughts and prayers and condolences with his family and Memphis. It gives you a whole different perspective when you look at all your guys.” 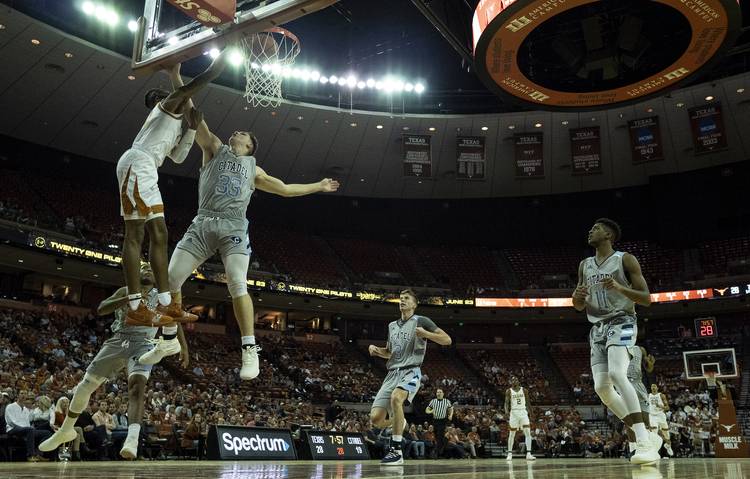 Still No. 1: Texas ousts Baylor to extend its reign as the Big 12’s champion

The Dotted Line: How important is four-star offensive tackle Javonne Shepherd to Texas?

David Pierce on 2020 recruits: ‘We definitely held on to a few that will compete for roles right away’