Nearly nine months ago, Texas closed out last baseball season on Cole Quintanilla’s strikeout of a rival batter from Oklahoma.

For Longhorns fans, the offseason layover — one that was longer than usual considering the team missed both the Big 12 and NCAA post-season tournaments — is over. Texas heads to Houston for a season-opening series against Rice that begins on Friday.

The Longhorns are hoping for a better fate this spring.

“Big picture, we want to put ourselves in the best (position) to play in Omaha,” first baseman Zach Zubia said. “That’s the biggest goal for us this year. With that comes little goals such as positioning us to win every single game.”

The first pitch of the season will be thrown by Bryce Elder, the junior right-hander who earned all-conference honors in 2019 when he went 2-4 with a 2.93 ERA and 86 strikeouts. In starts opposite TCU’s Nick Lodolo and West Virginia’s Alek Manoah — the eventual seventh and 11th overall picks of the major league draft — Elder allowed seven hits and three runs over 15 2/3 innings.

With former UT great Huston Street on staff as a student assistant coach, Elder has been working on his fastball. He’s also more comfortable with his change-up.

“I should have four pitches at all times,” he said.

Starting behind Elder this weekend will be sophomores Ty Madden and Coy Cobb. Last year, Madden started eight times and was 4-1 with a 3.40 ERA. Cobb logged a 3.45 ERA over 13 appearances, 10 of which were starts. UT coach David Pierce gauged that Madden has “been as good as anybody all fall and early spring.” Cobb, he noted, has “been really sharp (recently).”

Pushing for a spot in the weekend rotation will be Quintanilla, fellow sophomore Kolby Kubichek and freshman left-hander Pete Hansen.

“It’s always open for competition,” Pierce said. “I just think that those three guys have earned the right to start. They have the experience, but they’re not in there just because they have experience.”

In Pierce’s first year, 39 of the team’s 40 weekend starts were made by five pitchers who are now pitching professionally. During the run to the College World Series in 2018, Texas relied on a rotation of Nolan Kingham, Chase Shugart and Blair Henley in all but one of its three-game series (Due to disciplinary reasons, Kingham lost his start in the outlier series).

But Texas failed last season to find a third starter behind Elder and Henley, who was a seventh-round pick by Houston. Cobb made it through the fifth inning in two of his eight weekend starts and eventually lost his job. Madden’s four weekend starts after Cobb’s demotion lasted a total of 16 innings.

On Thursday, Elder said that finding consistency in the weekend rotation would be good for Texas. Those three pitchers will have to earn it, though.

“If we go out and us three throw well, then I think we’ll be comfortable and we’ll understand that us three are going to throw every weekend,” Elder said. “But if that’s not the case, we’ll have to see what we’ve got to do.”

Rice was 26-33 in 2019. Junior infielder Trei Cruz is Conference USA’s preseason player of the year. The Owls were selected as the fifth-best team in their 12-school conference’s preseason poll.

After traveling to Houston, Texas will return to Austin for its first five home games of the season. Texas hosts UTSA and Lamar next Tuesday and Wednesday. Boise State comes to town for a three-game weekend series. 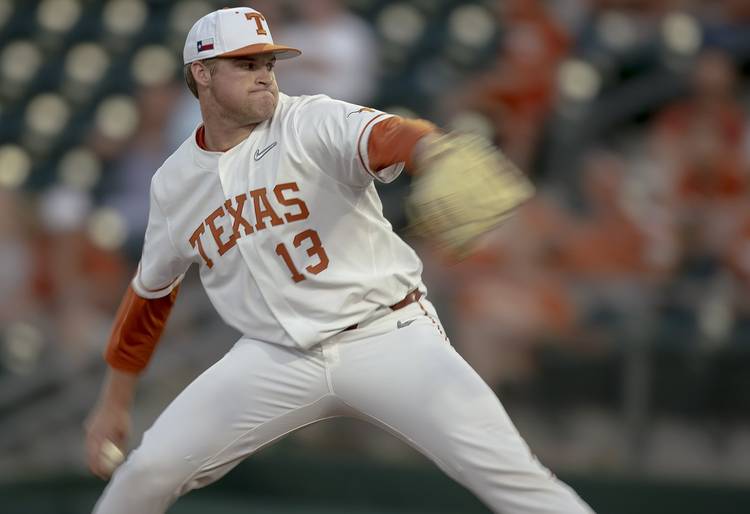