The state of Texas is sending a combined 21 prospects to the Elite 11 and The Opening Finals, which begins Saturday and concludes on Wednesday at The Star in Frisco. The Longhorns are represented by three commitments in quarterback Hudson Card and offensive linemen Logan Parr and Jake Majors. In-state targets like cornerback Jahari Rogers, defensive end Princely Umanmielen and defensive tackle Vernon Broughton are also expected to compete.

Texas’ 2019 class was full of out-of-state flavor. The Longhorns signed 10 prospects from outside of the Lone Star State. Don’t expect that number to matched again under Herman with the Dallas pipeline now growing. The Longhorns already recruit well in Houston and east Texas.

That doesn’t mean Herman and the Longhorns won’t mine for talent outside the state when a prospect arises at a need position. Three of Texas’ top targets in the 2020 class will converge on Frisco, led by a former commit.

Cooper still listed Texas in his top five schools despite de-committing from the Longhorns in the spring. He’s an electric back with track speed and elite quickness. He can play running back, wide receiver and cornerback. He’ll be a slot receiver weapon deployed on special teams and in jet-sweeps, much like Purdue used freshman All-American Ronald Moore last season, another former Texas commit. It’s unfair to call Texas the favorite, but the Longhorns are undoubtedly in the mix to sign Cooper.

Ransom is among three Arizona prospects Texas is eyeing alongside five-star cornerback Kelee Ringo and five-star running back Bijan Robinson. Ransom plays at the same high school as Robinson, and the two hold a similar list of top schools. The school to beat is Ohio State. Ransom is arguably the best safety in the country and reminds UT coaches of a young Caden Sterns because of his talent and natural instincts for the position.

Texas fans watched the offense excel with big wide receivers like Collin Johnson. Wilson is in that same mold with his 6-6 frame. He was on campus last weekend for Texas’ Heat Wave event. Herman holds roots to California and will continue to recruit the state with vigor despite the recent drama with Bru McCoy. Wilson would be a major land and an instant replacement for Johnson, who is entering his senior year at Texas. 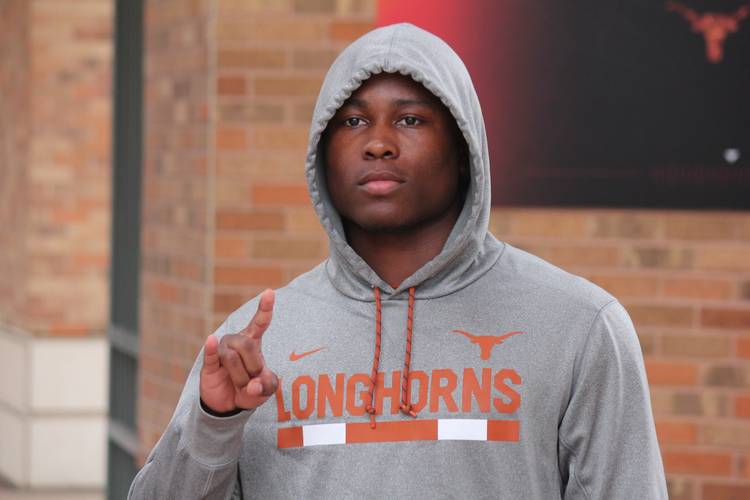 OSU Makes the Final Cut for 2020 Defensive End from Missouri