The Longhorns aren’t burning down the recruiting trail just yet in the 2020 class, though the offensive side of the football is slowly evolving into a solid group of prospects. The headliners are quarterbacks Ja’Quinden Jackson and Hudson Card. All six of Texas’ commitments project to the offense.

Texas is done at quarterback with the pair of four-star pledges. Jackson is a supreme athlete who ranks No. 2 on the Fabulous 55. He led Duncanville to a Class 6A Division I title game appearance as a junior. Jackson wants a shot at quarterback in college, and his big body and physical running style resemble quarterbacks Tom Herman utilized at Ohio State, and even with Sam Ehlinger at Texas.

Card is also an incredible athlete. He starred at wide receiver for Lake Travis as a sophomore before moving full-time to quarterback last season, continuing a tradition of elite quarterbacks to come out of the program. Card is further ahead as a passer. The emphasis to land multiple quarterbacks increased with Cam Rising transferring to Utah. The transfer portal forces programs to plan for a transfer, specifically at quarterback.

The sixth commitment is Jaden Hullaby, a versatile running back from Bishop Dunne High School in south Dallas. He plans on becoming a Swiss army knife-type of weapon in Texas’ offense with his ability to impact the game as a rusher and a receiver.

Texas isn’t done recruiting the offensive side of the football. We examine the top targets at each position:

Texas missed out on its top two targets in the 2019 class when Noah Cain and Trey Sanders pledged to Penn State and Alabama, respectfully. It appears the Longhorns will miss out on the top prospect in the nation after five-star running back Zachary Evans left Texas off his list of five finalists. He’s the No. 1 player on the Fab 55 and hails from Galena Park North Shore. That means Herman and his staff must turn their attention elsewhere. Luckily, there is plenty of talent at the position in the cycle.

Arizona provided Texas with two four-star talents in 2019. The Longhorns are back in Arizona recruiting multiple prospects. Robinson is a five-star from Tucson who is high on the Longhorns. He’s rushed for 2,000 yards in the past two seasons. Ohio State and UCLA are also in the mix.

In-state products McClellan and Jordan are among prospects Texas is keeping close tabs on right now. McClellan is a five-star talent from Aledo committed to Oklahoma. He’s said that Texas remains in contact. Jordan is a third-down back the Longhorns could use to pair with a more traditional back like McClellan or Robinson.

Richardson is a TCU commit from Oklahoma who picked up a Texas offer on May 18.

The wide receiver position suffered a big loss when five-star Bru McCoy transferred back to USC. The move of Jordan Whittington to running back could be permanent after a strong showing in the spring. The Longhorns lose Collin Johnson and Devin Duvernay after the 2019 season. The rest of the receivers room is relatively young and unproven. It’s up to the coaching staff to keep adding talent. The state’s top two receiver prospects are already committed to Texas A&M.

The best in-state option remaining is Johnston, a tall, long wide receiver from Temple. The four-star is shooting up recruiting rankings because of his natural size and unreal athleticism. He stars on the basketball court and the track outside of his football prowess. Texas signed his quarterback from last year in Jared Wiley, who is expected to move to tight end as a Longhorn.

Wilson could follow the same path. A product of California, Wilson is 6-6 and ranked as the fourth-best prospect in the country at his position. Texas knows how valuable that height can be after utilizing Johnson and Lil’Jordan Humphrey to near perfection in 2018.

Cooper is a former Texas commit who remains interested in the Longhorns. The Missouri native is Texas’ top choice at slot receiver in the 2020 cycle.

Fouonji is from Midland Lee, and is another tall, long option for the Longhorns.

Texas doesn’t appear overly interested in landing a traditional tight end unless a can’t-miss prospect shows real interest. Hullaby could be considered a tight end commit if he wasn’t listed as an athlete. His 6-2 frame and receiving skills suggest a future at H-back. Texas plans to use the commitment in a variety of ways. Jackson, who will start his career at quarterback, could also project to tight end with his combination of size and speed. The Longhorns have only offered four tight ends in the 2020 class. Two are committed to other schools. Gruver’s Jalin Conyers didn’t include Texas among his finalists. That leaves Rogers, a four-star from Washington state.

Texas began the class with a commitment from Card. The foundation of the class is in the three current commitments. The original plan was to add Damieon George of Galena Park North Shore to the mix if Evans was considering the Longhorns. Evans left off Texas and George recently committed to Alabama. That makes Lindberg the top target left on the board. He’s a true tackle prospect, unlike the three prospects committed to Texas. Lindberg is the fourth-ranked player on the Fab 55 and a four-star prospect.

Karic is from Southlake Carroll. He’s a raw prospect who grew up playing defensive end. He’s slowing growing into his 6-5 frame and programs like Texas think he’s a potential star at offensive tackle because of his athleticism. Ford was a one-time LSU commit who is back in play. The Cedar Hill offensive tackle is ranked No. 22 on the Fab 55. He doesn’t hold a Texas offer, but that could change with the four-star no longer pledged to LSU. 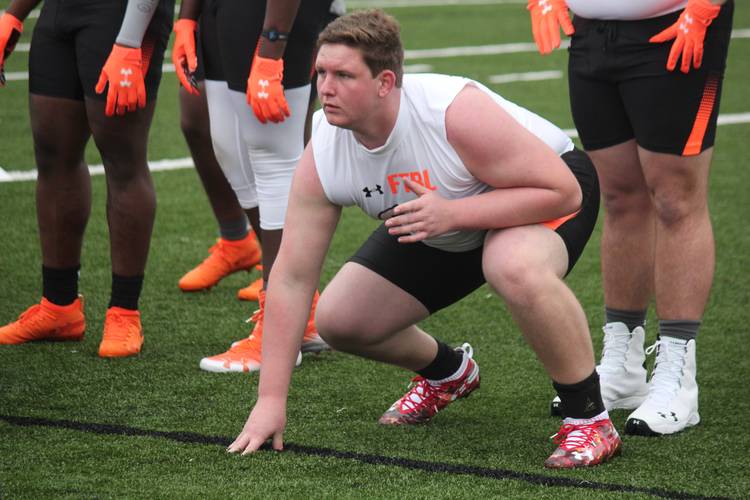 Texas holds onto No. 25 ranking in the Associated Press’ poll