We continue our annual Triplets of the Big 12 series, looking at every conference school’s expected standouts at quarterback, running back and receiver.

FYI: 6-5, 225-pound junior from Cincinnati; a former Pitt signee, he was one of the country’s top JUCO quarterback prospects when he signed with the Jayhawks out of Mesa Community College. He redshirted at Pitt in 2017, getting into three games on special teams.

New Jayhawks coach Les Miles hasn’t revealed his complete offensive vision for Kansas yet, but he’s dropped some big hints on who his starting quarterback will be. It’s MacVittie, a one-time Louisiana resident who first saw Miles in 2005 when MacVittie’s family attended a LSU-Alabama game. Miles still was two years removed from winning a national championship with the Tigers. But the memory stuck with MacVittie and his family,

The quarterback, who played high school football in Ohio, first signed with Pitt. Then he transferred to Mesa Community College for a season. He was the top-rated pro-style quarterback in the JUCO ranks, per 247Sports’ composite ratings. Kansas was the first Division I program to offer the quarterback. Former Jayhawks coach David Beaty was the one who offered him but it was Miles, who replaced Beaty, that ended up signing him.

Miles named MacVittie as the top guy on the depth chart last month. He’s a 6-5, 225-pounder, so he’ll at least look the part of a pro-style quarterback.

But don’t overlook Carter Stanley. He entered his previous three seasons down on the depth chart, but has emerged as the top guy by season’s end. His most significant win of his career, to date, came against Texas in 2016.

FYI: 5-10, 170-pound sophomore from New Orleans; was last year’s Big 12 offensive freshman of the year by conference coaches. Led the Big 12 and was sixth in the country on kickoff returns and was one of only two players in the Big 12 with a 100-yard rushing and receiving game.

Williams, now a sophomore, was a bright new offensive face in the league last season when he earned Big 12 freshman of the year honors. He averaged 102.2 yards a game, which was second-best in the league behind Kansas State’s Alex Barnes. And he also led the Big 12 in all-purpose yardage when you combine what he did as a receiver and kick returner.

But Williams was arrested last December, days after the season ended, and was charged with punching a woman. He was reinstated to the team this summer after being ordered to perform community service and complete anger management and domestic abuse programs. He also can’t play in the first game. Williams wasn’t allowed to train or practice with the team during his suspension, so it’s unclear what impact, if any, it will have on him.

Miles also has promised to use a fullback. His most sentimental signing this summer probably was his son Ben, who transferred to Kansas from Texas A&M. Manny Miles, another son, is a walk-on quarterback.

FYI: 6-0, 193-pound senior from Patterson, La.; started his career with Alabama, playing in five games for the Crimson Tide as a freshman in 2015 (2 catches for 9 yards) before transferring.

The Jayhawks had one of the worst passing offenses in the Big 12 a year ago, ranking above only Kansas State. So maybe it’s not a loss that KU lost its two top receivers in Steven Simms and Jeremiah Booker.

Charlot has been with the Jayhawks for three seasons, including a redshirt year, but at one time he was an Alabama receiver with a four-star pedigree. He’s been hampered by injuries, but surely Miles can find an effective use for a receiver who stands 6-4.

Miles also signed two more junior college receivers — Ezra Naylor and Andrew Parchment — to help win in his initial season. Also look to Williams to help here out of the backfield; he caught 33 passes as a freshman. 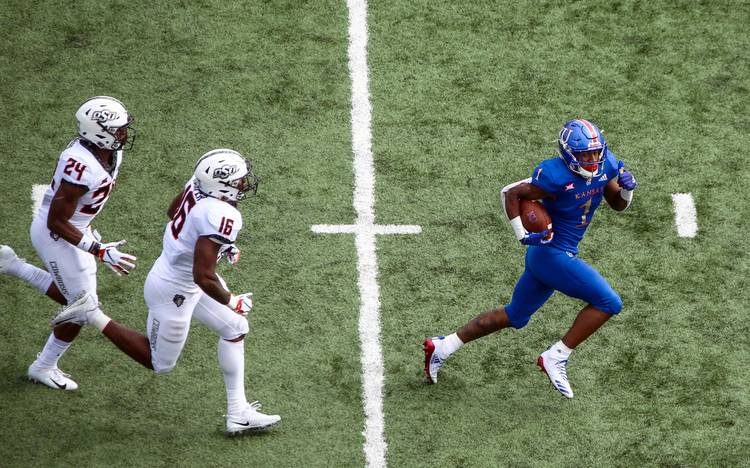 SE: Nemechek Eager to Return to Field for K-State Soccer

Texas climbs to No. 9 in NCAA poll, but five games against ranked foes await on this week’s schedule