We continue our annual Triplets of the Big 12 series, looking at every conference school’s expected standouts at quarterback, running back and receiver.

Purdy, a mostly overlooked recruiting prospect from Arizona (the three-star prospect was the nation’s 839th overall prospect in 2018, per 247Sports’ composite ratings), helped revive Iowa State last season, right when it looked like the Cyclones would be downgraded to an also-ran program.

Purdy, then a freshman, earned the starting job after game five. He went 6-1 in league games.

He was the first true freshman quarterback to start for Iowa State since 1995. And despite his newness to college football, his 66.4 percent completion rate was a school record. His second defeat of the season was in the Alamo Bowl against Washington State, but even then, he set a school post-season game record with 315 yards passing and two rushing touchdowns.

A big storyline for the Big 12 will be how well Purdy fares without his two best offensive weapons from a year ago — running back David Montgomery, who’s now with the Chicago Bears, and receiver Hakeem Butler, now catching passes from Kyler Murray with the Arizona Cardinals.

FYI: 6-1, 205-pound junior, from Frisco Heritage; was a double threat for the Cyclones in 2018 as a backup running back to Montgomery but also as one of the top return men in the country. His longest career carry is 24 yards, which came against Texas last year.

Purdy lifted the Cyclones lasts year, but Montgomery  was the heart of the offense. He rushed for more than 1,000 yards in consecutive seasons and was a third-round pick in April.

Nwangwu is the most dynamic back with experience. He started for Montgomery against Texas a year ago and led the league in kick returns. His 26.8 yards per return were best in school history.

Head coach Matt Campbell also could look to a pair of freshmen, Breece Hall and Jirehl Brock. He has as many as five backs in contention for the starting job.

The good news is whomever wins the job will have an intact offensive line from a season ago.

FYI: 5-10, 180-pound senior from Cincinnati; was the second-ranked recruit in Ohio in 2015, when he was a finalist for Ohio’s Mr. Football Award. He chose Iowa State over Wisconsin and Georgia Tech. His streak of 32 straight games with a catch was snapped at Royal-Memorial Stadium last November, by Texas. That was the second-longest streak in school history.

Where will the receivers be without Butler, the big-play wideout who averaged nearly 22 yards a catch a year ago, the second-best among all Power Five receivers.

Campbell recently said of his youngsters on the team:  “I think there’s a lot of talent there.  But … it’s just talent until you get a chance to see it.”

Jones, who has started parts of three years, probably will be the go-to guy to start the season. He caught 43 passes with four touchdowns last fall as a complementary option to Butler. But there are other intriguing transfers: Sean Wilson and La’Michael Pettway. Wilson transferred from Butler Community College. Pettway played three seasons at Arkansas and had 30 catches in 2018. 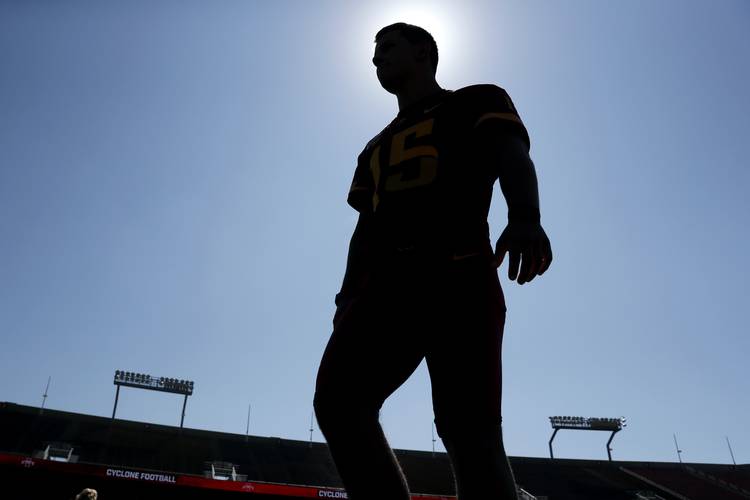 Texas 85, Kansas 77: With room to improve, the Longhorns join an elite group of winners