So it’s a little fringey but OSU taking on Boise State is one of the top first-ever matchups of the 2018 season.

Though not a Power vs. Power matchup, Boise State-Oklahoma State ought to be one of the best non- conference games of the year. Though the Cowboys are known for their potent passing attack (No. 1 in the FBS in 2017), they are retooling after losing their starting quarterback and top two receivers. That’s not the case for Boise State, who brings back quarterback Brett Rypien and two of his top four targets. It’s a potential mismatch vs. an Oklahoma State secondary that finished last season ranked No. 117 in the FBS in passing defense. [FBS Schedules]

Three things: 1) Woof – that passing defense ranking has some bite to it, 2) Boise-OSU is the perfect matchup of teams capable of snake-biting great teams and 3) what a test for the new defensive system against a veteran quarterback with an NFL pedigree.

Bobby A. brought an update on the new jumbotron and interviewed the manufacturer about a unique element of the Cowboy version.
Even the manufacturer of the board, Daktronics, and their people are amazed at how this board will set up with it’s location.

“The recent trend is that video boards in college football stadiums are getting bigger and bigger, but what sets this particular one apart is the fact that it’s so close to the field,” said Daktronics’ Perry Grave. “This board is not on top of the upper deck, far away from the action. It’s much closer. The quality of the board, combined with its proximity to the field will give fans a much larger, brighter and better picture.” [GoPokes]

And that’s a super interesting element – the screen being so close to the ground and not high atop the stadium. 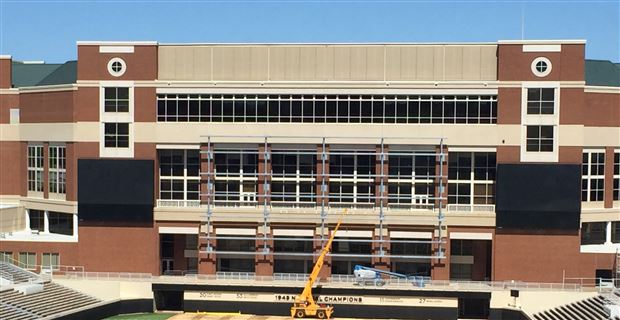 TravelChannel has GIA as one of the top 16 college basketball stadiums….Penn State OC that took over for Mississippi State sounds like a good deal….Matthew Wolff chats about his swing….See the five college football coaching candidates on the rise

Some people just have it all.

Already a three-time All-American on the field and in the classroom, Vanessa Shippy is now the first two-time #Big12SB Scholar-Athlete of the Year! #okstate

Gundy gives his take on the Pittsburgh Pokes.

.@CowboyFB Coach Mike Gundy discusses the tremendous fit for his former players in Pittsburgh, @JamesWashington‘s quiet personality, breaking down a ‘deep threat’, @Rudolph2Mason as a student of the game and more. pic.twitter.com/Tk8pVULDCT

Another former Cowboy will be on the tour before long.

What You Missed on PFB