The big news coming out of Mike Gundy’s weekly press conference this past Monday was Jalen McCleskey’s decision to redshirt and transfer. When a guy who has a chance to break into the top 10 all time in receiving yards at Oklahoma State decides to leave the school, that’s obviously going to be all over the headlines. However, in regards to this weekend’s game against Kansas, Gundy mentioned something about the Jayhawk defense which I wanted to explore further.

When asked to give some insight on the Kansas defense, Gundy said they like to “corral the middle of the field and force the ball outside.” Now, what exactly does he mean by this and how can the Cowboys combat this style of play?

Aside from a few years spent at Minnesota, Western Kentucky and North Texas, Kansas defensive coordinator Clint Bowen has been a part of the program since his playing days in the early 90s. He’s done a great job with the players he has at KU and he’s led some pretty respectable defenses over the years.

In the past, the Jayhawks have based out of a 4-3 using a Nickel defender as the strong side linebacker.

However, this season, they are basing out of a tight three-down lineman front with the two outside lineman in 4i techniques (across from the offensive tackle, slightly to the inside shoulder). They run a lot of Cover 2, Tampa 2 and Cover 3, and have dropped eight men into coverage a lot this season. 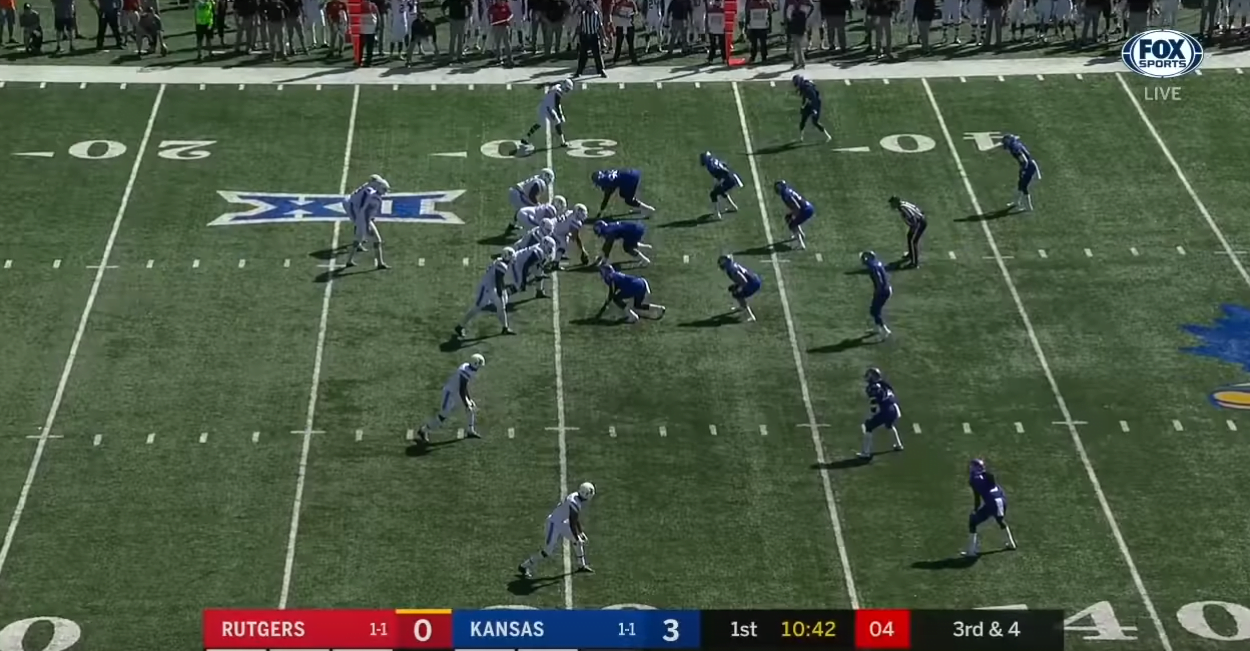 Against the run, their main goal is to “spill” the running back outside to their “force” players to make the tackle. What this means is their defensive lineman and inside linebacker want to prevent the running back from gaining yards up the middle and “spill” him to the outside.

The outside linebackers, cornerbacks and safeties are the “force” players who will either make the play or turn the ball carrier back into the spill players who are continuing their pursuit after the ball. 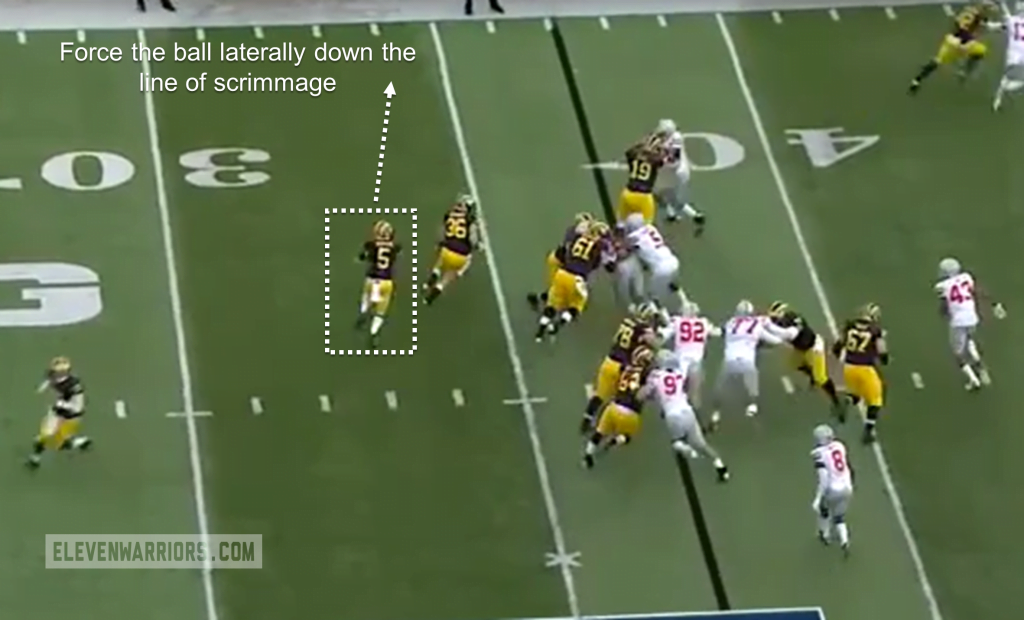 The spill players will fit the inside half of their gap responsibility and force the back to run laterally. Here’s an example of Iowa State’s doing this to the Cowboys last season.

The goal of KU’s defense is to clog the middle with their defensive lineman, and let the rest of their defense make a play. By doing this, they are able to take away several key running options for teams like OSU.

Ian Boyd of footballstudyhall.com explains how this defense causes trouble for the inside zone:

The biggest problem for the offense is that the LBs are pretty covered up and free to “rock back” into the cutback lanes while the trapping H-back has to round the corner and find a guy to block on the move. It’s child’s play for a disciplined LB corps to blow that block up and either kill the play or spill the back laterally to the secondary run support. If inside zone is getting spilled laterally it’s pretty much DOA, the whole point is to allow the RB to get going north and south with square shoulders.”

In addition, this defense causes issues for any running plays with a pulling guard as the guard is leaving the tackle in a tough spot with how the defensive lineman is set. He has to step inside to prevent the defender in the 4i technique from darting in the backfield to make a play. 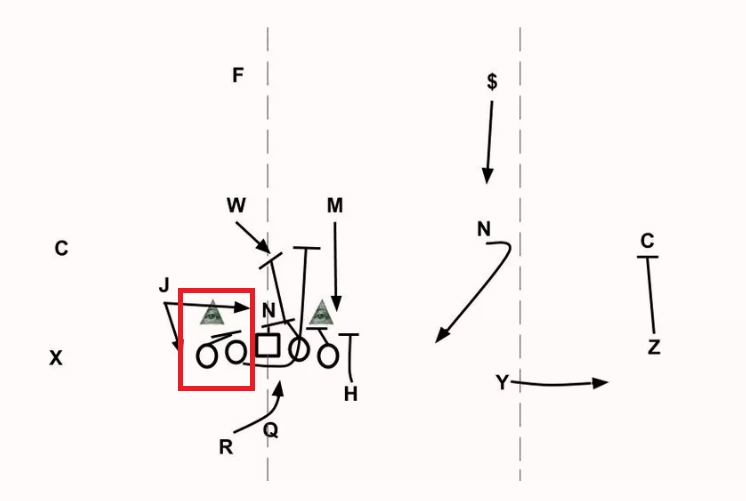 So, what are the best options for the Cowboys to run the football against this look on Saturday?

Well, Oklahoma State is more talented than Kansas up front, so they should just be able to win their matchups and still run the ball inside on the inside zone, power and GT counter. However, if they start to have issues getting the ball up the middle of the field, they can revert to a concept which Thomas Fleming covered in detail about 10 months ago. The dart, or “wrap” run play. 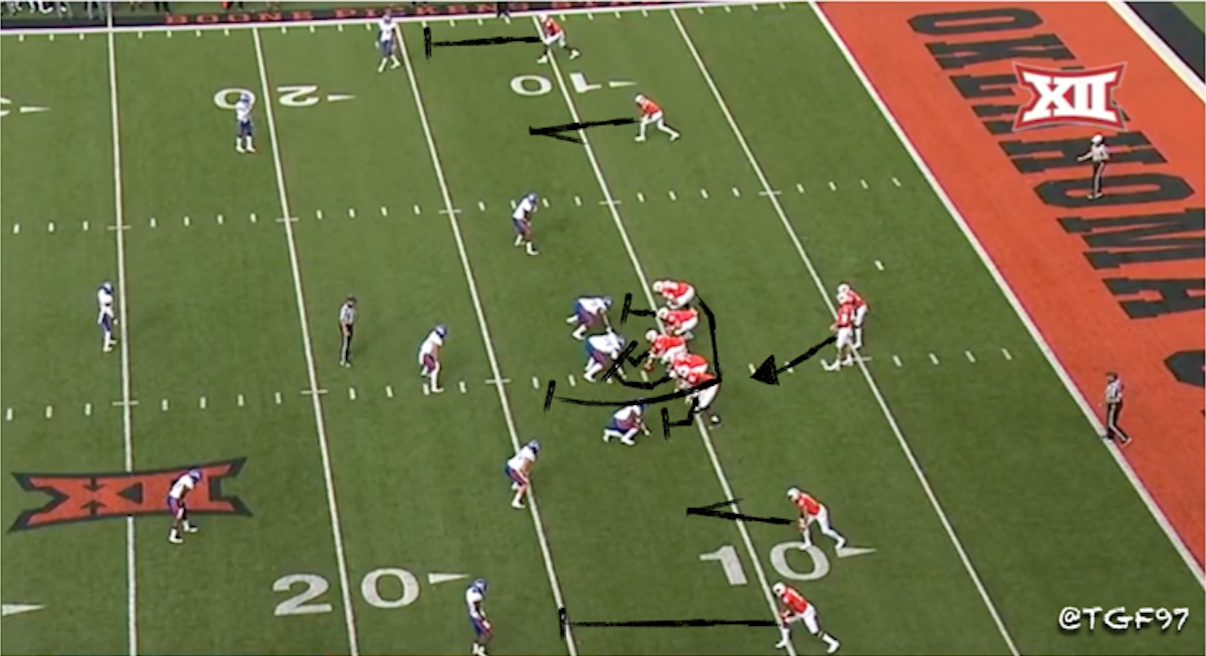 Boyd explains why this play is favorable against the tight three-man front spill defense.

The advantage in this play is that most of the blockers are just focusing on keeping the DEs and LBs pinned inside where they are to start the play. The pulling tackle has to find his man in space but he’s probably looking to block a 200 pound DB so it’s a pretty favorable assignment so long as he at least gets in the way.

In addition, the four-receiver set against Kansas’ three linebacker look is always a favorable matchup for the Cowboy offense. The pass concepts in this RPO concept will also keep the defense honest, and if they can get both the ground game and passing game going, it should be a long day for this Jayhawk defense.

In conclusion, we saw KU try to implement this tactic last season in Stillwater and the Cowboys were still able to rush for 167 yards and 5 touchdowns. Even though it’s their primary defense this season, I think the Cowboys will still have a successful day on the ground.

The post Film Review: What to Expect from the Jayhawk Defense appeared first on Pistols Firing.

The Dotted Line: A closer look at Texas’ nine offers given out for 2021